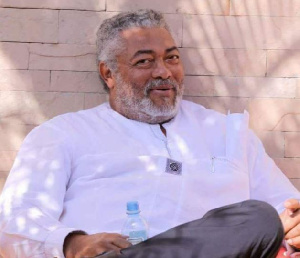 VIDEO: What J.J. Rawlings said about Paul Adom-Otchere in 2020

Per his own words, he is a rugged and resolute defender of the Nana Addo Dankwa Akufo-Addo government and would go every learnt to use his platform to defend the interest and image of the government.

Adom-Otchere’s unrestrained rant dubbed editorial on his show has seen him clash with a number of people with the latest being Togbe Afede, the Agbogbomefia of the Asogli state.

From Asiedu Nketiah to Manasseh, the Good Evening Ghana host has taken on a number of high-profiled people with late former President Jerry John Rawlings being a ‘victim’.

Safe to say that Rawlings was not a fan of Adom-Otchere’s opinion-based journalism as he once chided him publicly for spewing nonsense.

Addressing a durbar to climax the 38th anniversary of the 31st December Coup D’etat, Jerry John Rawlings chastised the host of Good Evening Ghana, Paul Adom-Otchere, saying that he always spews out nonsense on his television programme.

“That small boy called Adom-Otchere or something wakes up every day to speak nonsense,” he said.

Recounting the circumstances that led to the 1981 coup, Mr Rawlings stated: “During the Acheampong regime, the banking sector, especially the Ghana Commercial Bank, was plunged into unimaginable corruption”.

He further observed: “The bank served as an avenue for cronies and a particular ethnic group to feed fat on loans without collateral. Sadly, these loans were never paid”.

He said further, “A two-man committee established then to look into the fraudulent activities of the bank had their activities come to an abrupt end when one of the members was killed and burnt under mysterious circumstances. How bad could the situation have been to warrant such a heinous and atrocious crime in an attempt to conceal their misconduct? These and many more wicked and morally disgusting actions were common place”.

“It is however unfortunate that some have chosen to siphon the negatives, leaving out the overwhelming gains made by these interventions of the people. The two interventions, 1979 and 1981, were not about Rawlings. They were the effects of the mood of the country and the mood of the people. In telling the story, the context and the circumstances cannot be discounted or overlooked,” he stressed.

Tags 2020 about ADOM IN J.J Otchere PAUL Rawlings said WHAT