Home / ENTERTAINMENT / VIDEO&PHOTOS: These are what your favourite celebrities wore to Afia Schwarzenegger’s father’s funeral 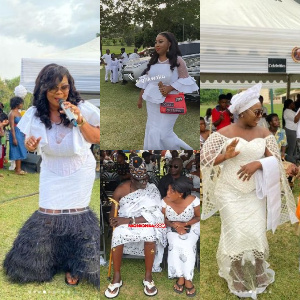 VIDEO&PHOTOS: These are what your favourite celebrities wore to Afia Schwarzenegger’s father’s funeral

The past weekend saw several reports highlighting everything that happened at the funeral of the 83-year-old father of Afia Schwarzenegger.

The noise and announcement sank well with many celebrated icons in the country, as they turned up in their most fashionable clothes to bid Mr Adjei farewell into the afterlife.

Styles, trends, smiles, makeup, shoes, bags all formed the completed package these celebrities presented at the funeral held at the Kwame Nkrumah University of Science and Technology Park.

Kumasi was indeed the hub for many celebrities around Ghana on March 12 and 13.

The actress lost her father, Augustine Adjei, on January 17, 2022, after a short illness.

She announced her father’s demise in a social media post that read, “My hero has gone to be with the Lord. Rest in peace Daddy…I’m lost.”

Shortly after her father’s passing, Tracey Boakye, Diamond Appiah, Kwaw Kese and his wife among others, paid a visit to Afia Schwarzenegger to mourn with her.

She had earlier lamented about how her father’s condition had worsened, adding that she isn’t living her best life as a result of that.

She reiterated the daunting task involved in handling her father’s situation in a video making rounds on the internet.