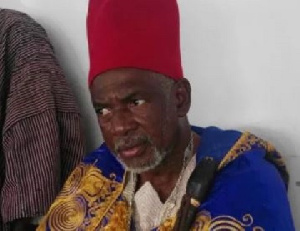 Ad
Overlord of the Waala traditional area and president of the Waala Traditional Council, Wa Naa Fuseini Pelpuo IV, has extended the ban on Islamic preaching in the area.

This was contained in a press release dated July 29, 2021, and signed on behalf of the Wa Naa, by Naa Ali Seidu Pelpuo, who doubles as the Paramount Chief of the Busa traditional area and Vice president of the Waala Traditional Council.

According to the release, the first ban, which ended on Wednesday, July 28, has been extended effective Thursday, July 29, to August 4, 2021, “to give ample time for the Overlord and the council to put together guidelines for preaching from recommendations made by all stakeholders.”

It furthered that the decision for the extension was taken in consultation with the Standing Committee of the Waala Traditional Council.

The Wa Naa expressed his appreciation over the compliance of the order by all the feuding factions.

“The Overlord is appreciative of the compliance accorded in the just ended ban,” the statement said.

While calling on all those affected by the ban to be patient with the second ban, he assured both sides of coming out with a comprehensive preaching manual to bring the matter under contention to rest.

“It is hoped that all those concerned would be patient and comply with this second ban. He wishes to assure that the comprehensive preaching manual being put together will solve the problem permanently,” the statement added.

The release announcing the extension of the ban was copied to the Upper West regional Security Council (RESEC), Municipal Security Council (MUSEC), the Municipal and Regional Police commanders, National Intelligence Bureau (NIB), the Yeri Naa (Supreme Spiritual leader of the area), head of the Tendamba (Custodians of the land), Registrar of the Waala Traditional area and leaders of all the religious sects.

Following tensions in the Wa Municipality arising from the preaching of some scholars in recent times, the Wa Naa decided to place a temporal ban on all Islamic religious preaching about a fortnight ago to maintain a peaceful atmosphere.