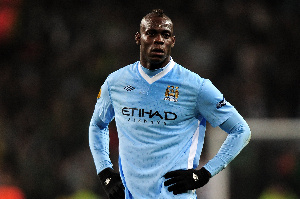 Italian forward of Ghanaian descent Mario Balotelli served a reminder of his incredible talent with an insane rabona for his Turkish side Adana Demirspor in their 7-0 thumping of Goztepe in the final game of the 2021/2022 Turkish League.

Mario Balotelli wove through the defence line of Goztepe before unleashing the rabona pass the goalie who attempted to save with his foot.

The incredible goal is one of five goals scored by Balotelli on Sunday, May 22, 2022 in the Turkish league.

Balotelli scored five goals on the day as his team managed a 7-0 humiliation of Goztepe and send his goal-scoring record to 18 with four assists.

The former Manchester City striker had an incredible season in Turkey which saw him make a return to the Italian national team in January this year.

He was however declined call-up for the World Cup play-off against North Macedonia in March.