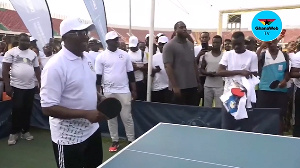 Vice president, Mahamudu Bawumia showcased his hidden table tennis talent at the launch of the National Fitness Day at the Accra Sports Stadium on Saturday, September 10, 2022.

Dr. Bawumia good bat handling and master serving made him difficult to handle and won the match which did not go through the normal tennis match rounds.

Activities carried out on the day included a walk, aerobics and mini-games.

During the event, Bawumia led hundreds of Ghanaians on a short walk from Accra Sports Stadium to the Gender Ministry, Independence Square, and back to Accra Sports Stadium. When the attendees arrived at the stadium, they were led through aerobics before the vice president and other dignitaries spoke.

In his speech, Bawumia thanked President Nana Addo Dankwa Akufo-Addo for immediately approving the National Fitness Day when it was proposed to the cabinet.

He also congratulated Usif Mustapha on the successful organisation of the first edition of the event before confirming that it will be held on the second Saturday of every month in all 16 regions.

The National Fitness Day will be held on the second Saturday of every month and will be replicated across all 16 regions.