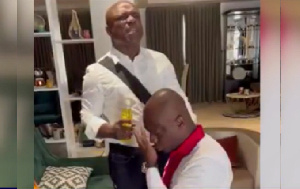 Justin Frimpong Kodua, the new General Secretary of the New Patriotic Party, NPP, beat John Boadu, the favourite candidate ahead of the July 16 elections that formed part of the NPP’s National Delegates Conference in Accra.

The figures showed clearly that out of the half-dozen candidates that contested Kodua, known by his initials JFK, had caused an upset by dethroning the very influential John Boadu.

All candidates for the role and other executive positions had invested in campaigns, courtesy calls and other forms of wooing the electorate.

It turns out that amid the campaigns, candidate JFK also took the matter to the spiritual realm and sought divine intervention.

Proof of this is in a video clip showing Kodua being anointed and prayed for by Rev. Kusi Mensah, who happens to be the Secretary to the Board of Trustees of the National Cathedral of Ghana project.

The video was aired on the July 18, 2022 edition of Good Evening Ghana programme hosted by Paul Adom-Otchere. The location of the video and date is unknown.

In his analysis of the outcome of the NPP conference, Adom-Otchere underlined the role of spirituality in victory or loss.

“A very good man John Boadu, did not win. But I always talk about the other side. I talk about the battle is intellectual but the advantage is spiritual. It is always important.

Rev. Kusi Boateng stands over Kodua, who is kneeling, with anointing oil – both men with their eyes firmly shut and with an unsighted by-stander responding as the prayer goes on.

I declare that even as you go home, and this oil… that is placed on your head, the difference will be made. To an extent that men that were even angry when they look at you, will have no option than to vote for you.

You are going and not coming back with nothing short of victory, for your victory has already been declared and it shall be seen, it shall be seen by the world and when He begins something he also finishes it.

Your protection is paramount, your protection cannot be compromised. You are covered in the blood of Jesus, go in peace and come with testimonies … in Jesus name, Amen.

Watch the full prayer session from 53rd minute till 54:15 seconds

Previous DOWNLOAD Mp3: Shatta Wale – What The F*ck Do You Know Bout Me
Next Let my ex-lover rot in jail, her acid attack has ruined me – Angry man