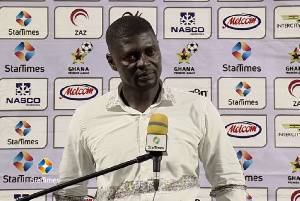 We will correct the mistakes against Asante Kotoko – Samuel Boadu

Hearts of Oak coach, Samuel Boadu, is hopeful that his team will be in the right shape for the Super Clash against Asante Kotoko on Sunday, February 20, 2022.

The Phobians for the second consecutive time dropped points following their goalless draw with Real Tamale United on Sunday, February 13, 2022.

Boadu during a pitch side interview said his team will work hard and correct their mistakes before meeting the league leaders.

“We don’t care whoever we are playing with, it’s a competition and we are competing with all the clubs. So, we will correct our mistakes and work extra hard for Kotoko’s game,” he said.

The reigning champions are having a challenge title defensive season as they sit 8th on the league table with 24 points.

The Phobians have won only two of their last five matches, drawing two and losing one.

Meanwhile, Asante Kotoko, who beat Accra Lions 3-1 have won three, lost and drawn one of their last five matches in the GPL.

The Porcupines occupy the top spot on the log with 36 points with Bechem United following up with 30 points.

Tags AGAINST ASANTE Boadu CORRECT Kotoko MISTAKES samuel THE WE WILL