Home / SPORTS / Why did VAR rule out Benzema’s goal in the Champions League final vs Liverpool? 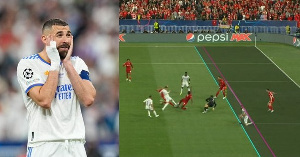 Why did VAR rule out Benzema’s goal in the Champions League final vs Liverpool?

Karim Benzema briefly thought he had continued his stunning run in front of goal for Real Madrid in the Champions League before VAR brought his opening strike back for offside.

The Frenchman converted one of the few chances to fall to the Merengue in a first half in which Liverpool held the upper hand.

But he was deemed to have been in an illicit position when he struck, leaving the final deadlocked at 0-0 when the half-time whistle blew.

Why did Benzema’s goal not stand?

The first half was in its final minutes when Benzema struck for what he thought was his 16th goal of the Champions League campaign.

A mix-up in the Liverpool defence left the Frenchman with a chance from close-range and he converted with ease.

Referee Clement Turpin, however, was quick to signal an offside, and VAR confirmed the decision.

While the final touch prior to Benzema’s finish appeared to come from Fabinho, it was ruled accidental, meaning that the forward was indeed offside.

????️ “Because Fabinho hasn’t deliberately played the ball back to Benzema, Benzema is not deemed to be onside.”

This one might need to be watched a few times but here’s what the rules state, explained by Peter Walton.