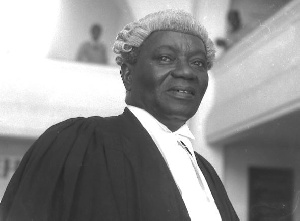 Recently, the failure of Joseph Boakye [JB] Danquah to win an election in his hometown, Kyebi, has become topical within the political sphere.

The trigger for this conversation started from Kwesi Pratt Jnr, Managing Editor of the Insight newspaper who during a discussion on the founders’ of Ghana, stated that Danquah, who is the granduncle of President Nana Addo Dankwa Akufo-Addo, can only be compared to the New Patriotic Party’s Ashanti Regional chairman, Chairman Wontumi in modern-day Ghanaian politics.

Pratt said he could not comprehend why JB Danquah – a member of the ‘Big Six’ – is regarded so highly today because, during his political lifetime, he failed to win an election even in his hometown, Kyebi.

“If you’re looking for the equivalent of Danquah in modern politics today, it is Wontumi. I’m serious. The level that Danquah attained in the UGCC has been attained by Wontumi in the NPP. He was a regional chairman.

Kwesi Pratt’s comments about JB Danquah prompted a response from Dr. Sekou Nkrumah, one of the sons of Osagyefo Dr. Kwame Nkrumah.

In a post on his Facebook timeline, he indicated that “protecting Nkrumah’s image is not done by running down political opponents! What is the sense of what Kwesi Pratt has said? He forgot that he also lost elections in Ghana and terribly so when he ran for parliament in 1996 (where he lived in Accra)!”

“I think the best way to protect Nkrumah’s legacy is by telling the truth. You praise him where it is due, and criticize his mistakes too…

“The name big six came about after they were put in prison for organizing demonstrations! Yes, Nkrumah then the General Secretary of UGCC was the brain and architect behind the political agitation. But that is why JB Danquah and the others then leading the UGCC brought him (Nkrumah) to Ghana!

But why did JB Danquah lose a parliamentary election in his hometown?

A scholarly article written by Ekow Nelson and shared by Dr. Sekou Nkrumah on his Facebook timeline gives a vivid explanation of what really happened regarding Danquah’s parliamentary election loss in his own hometown.

Nelson’s account indicated that Dr. Danquah’s woes emanated from partly from a ritual murder that occurred in Kyebi.

He said, “the Kyebi Ritual Murder and the protracted legal battle that followed it had more influence on Ghana’s politics than many appreciate. For some inexplicable reason, and rather worrisomely, not much is written about it in Ghana and it is hardly ever discussed – not even in the context of the biography of its key defence protagonist, Dr. J.B. Danquah.

“There is a deafening silence about his role in the interminable legal wrangle that followed the horrific murder of the Odikro of Apedwa, Nana Akyea Mensah.”

He noted that it occurred exactly six months after the death of Nana Sir Ofori Atta I in 1943.

“Six months after the death of Nana Sir Ofori Atta I in August 1943, the Odikro of Apedwa disappeared. According to evidence presented at the trial that followed, while Nana Akyea Mensah, the Odikro, was on his way to the Palace to perform the traditional custom of Wirempe – the consecration of the stool of the deceased Omanhene with ‘a mixture of soot, eggs, and the blood of a dog and brown sheep’ [Rathbone] – he was attacked in one of the courtyards, given a drink (presumably to drug or poison him), struck on the back and a ceremonial dagger thrust through his cheeks to stop him from screaming,” Ekow Nelson recounted in his article.

Nelson further said JB Danquah in the 1930s to 1940s was very influential in Accra, Kyebi, Saltpond and London on behalf of the Gold Coast.

“When Dr. Danquah became the inspiration and mastermind for the defence of the accused in the murder of the Odikro, the impact on the Colonial government – which was determined to prosecute the case – was cataclysmic. Subsequent interventions by high-profile British political figures from Winston Churchill (who argued against executing the murderers), Quintin Hogg (later Lord Chancellor Viscount Hailsham), R.A. Butler (author of the famous British 1944 Education Act), and Hartley Shawcross (the post-war Labour Attorney General) in the case, and attempts to remove Governor Alan Burns with whom Dr. Danquah had previously formed a close partnership, is testament to the reverberations it caused.

“Dr. Danquah was so unassailable (or so he thought) that he was in no doubt that he would prevail at the trial. He assembled a crack legal team including, Nii Amaah Ollenu (later to become Speaker of Parliament in Ghana’s Second Republic), Edward Akufo-Addo (father of the current President, Nana Addo Dankwa Akufo-Addo) and Sarkodee-Addo (both of whom went on to be Chief Justices of the Supreme Court of Ghana).

“With the best legal minds assembled, and relationships with the law and the powers of the land firmly in place, it was inconceivable to many of them, especially Dr. Danquah, that he could lose this case. So, when a jury of six Gold Coast natives and one European unanimously returned the verdict of guilty at the trial in Accra in November 1944, it came as a shock to the local intellectual establishment.

“…For the ordinary people of Apedwa and even much of Akyem Abuakwa, however, this was an open and shut case of murder and the perpetrators had to pay. As Burns put it, ‘the people of Apedwa, -under great provocation, were persuaded to take no revenge for the murder of their Odikro, but I am convinced that if some at least of the murderers had not been executed they would have taken a bloody revenge on those they held responsible’.

“At the same time, an elaborate lobbying campaign among sympathetic British parliamentarians was launched. Supporters of the defence lost no opportunity to exploit every loophole or parliamentary quirk or procedure to raise the issue to embarrass the Colonial Government…”

Ekow Nelson continued: “…The people of Akyem Abuakwa, enraged by the antics of Dr Danquah and his defence team, sent strongly worded telegrams of protest to the Colonial Secretary, Creech Jones. The Akyem Abuakwa Council urged him not to yield to the demands of the defence. Commuting the sentences of the murderers of Akyea Mensah would be a ‘perversion of justice and would have untold ramifications on the Gold Coast’ they argued. The murderers should be treated as they would in Britain. And in a chilling warning said, if ‘British justice fails to atone for the innocent blood of Akyea Mensah, surely we can avenge this death of our chief’.

“There was strong support too from the Chiefs; 62 of the 63 in the Joint Provincial Council urged the Governor not to resign; 17 of the 18 members of the Gold Coast Legislative Council backed a resolution of support for the Governor; crucially only Dr. J.B. Danquah, the defence mastermind and relative of the convicted murderers refused to support the Governor.”

So, after the United Gold Coast Convention, UGCC, was formed by JB Danquah and his colleagues, he visited Saltpond and in a meeting or rally, he said [in Fante] that…“sɛ obronyi bo ku yɛn a, bronyi bɔ kɔ ni krom”, that is, ‘if the white man is going to kill us; we will send the white man back home’…

Nelson observed that after the launch of the UGCC, the leaders invited Kwame Nkrumah to be General Secretary, however, [that] changed everything and in a remarkable twist of irony, marked the end of Dr. Danquah’s dominance in Gold Coast Affairs.

“It began with the elections of 1951 which the UGCC lost to the CPP (founded by Dr. Nkrumah), including in Dr. Danquah’s ancestral home of Akyem Abuakwa. He just about secured a seat in the new Legislative Assembly because of an electoral college system designed for towns and cities outside the main municipalities of Accra, Cape Coast and Sekondi.

“As with the Akyea Mensah case, Dr. Danquah did not take losing well. He bragged in a debate in 1952 in the first All-African Legislative Assembly that he was a well-known Constitution wrecker; I have already destroyed two and will happily wreck a third, he said of the 1951 Constitution. But after 1954 when he lost his seat, it was clear that his influence was at an end.

“The prosecution of the murderers of the Odikro may have motivated him to move against his British collaborators, but it revealed the depth of antipathy that many of his own developed for him. As Rathbone says, ‘Danquah himself was not universally loved, as events in the later 1940s and throughout the 1950s were to show more clearly than the generally rather uncritical analysis which has followed his sad death’.”

Read below the full account of Dr Danquah’s defeat.