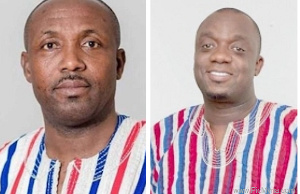 Member of Parliament (MP) for Assin Central, Kennedy Agyapong has diagnosed the cause of the defeat of John Boadu who was seeking to be retained as General Secretary of the New Patriotic Party (NPP) ahead of the 2024 elections.

NPP held its National Delegates Conference last weekend to elect national officers for the next four years as it looks forward to break the 8-year power cycle jinx in the 4th Republic.

One position which piqued the interest of many was the General Secretary position which was a two-horse race between then incumbent John Boadu and Justin Frimpong Kodua – who eventually emerged as winner.

In a Twi-based interview with Neat FM on Monday, July 18, Kennedy Agyapong dismissed reports that he masterminded the defeat of John Boadu.

While reacting to rumors that he had organized a pre-arrival party for delegates at Stoneview behind Erata Hotel where he and his team campaigned against John Boadu, the Chairman of Parliament’s Defense and Interior Committee said in the interest of unity within the party he did not engage in endorsement of candidates.

“I have never opened my mouth to say delegates should vote against John Boadu. I can never do that. I made up my mind that I want unity in the party because from experience, when party stalwarts declare support for a candidate against the other, it brings conflict,” he said.

Touching on what led to John Boadu’s defeat, the lawmaker said the open display of the party establishment’s support for the now immediate past General Secretary contributed to his unsuccessful bid.

“My own constituency members were campaigning against John Boadu and I fought with them several times asking them to stop. If you don’t like the person don’t go out to campaign against him. Ask anyone who came to Stoneview if I asked delegates to vote against anybody. I never did that and I can never do that to John Boadu.

“He has been good to me before. Even when people were against him, I was giving him directions on what to do. One thing I said to him which will make him think I am a prophet today is that I told him if the party members see that the ‘establishment’ backs him, they will vote against him because they feel the party did not take of them. They said they will vote against whoever party elders support

“I advised him not to let the support of the ‘party establishment’ be open because they will vote against him. That is what happened. I did not further my education so they don’t respect my intelligence but I deal with the ordinary people and I know how they feel,” Kennedy Agyapong said.

The MP further stated that the endorsement of 15 regional chairmen for the candidature of John Boadu triggered votes against him.

“The mistake of John Boadu was that he has all these 15 Chairmen [of the party] openly declaring for him. That angered the party members. Chairman Kutin [Central Region] supported JFK which was also not right” he added.
John Boadu lost his General Secretary position to Chief Executive Officer of the Youth Employment Agency (YEA), Justin Frimpong Kodua who polled 2,857 votes compared to the former who obtained 2,524 votes.

Following John Boadu’s defeat, Kennedy Agyapong has been accused of orchestrating his downfall with an Asaase Radio interview as reference.

In the said interview Kennedy Agyapong promised to ‘punish’ John Boadu for not listening to the plight of party members.

Mr. Justin Frimpong Kodua will serve as the General Secretary of the party for the next four years .

JFK is the former Deputy Regional Youth Organiser in 2010 and a member of the NPP Ashanti Regional campaign team in 2008.

He also served as a member of the National Youth Wing of the party as a Chairman of the Legal Committee of the youth wing.