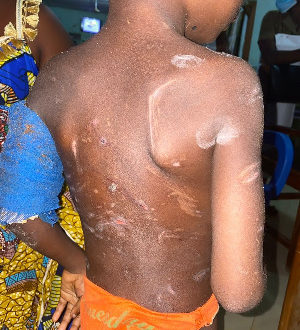 A seamstress based in Berlekope, a suburb of Kpong in the Eastern Region has been arrested over allegations of abusing and torturing her foster child, aged 6, officials have said.

According to information gathered from the Odumase District Police Command, 29-Year-old Nora Fumador was arrested on Monday, May 30, 2022, when she showed up at the St. Martin De Porres hospital at Agomanya to seek treatment for the child after she was compelled to do so.

The attention of the police was drawn to the case as they swiftly moved in to arrest the suspect who is currently being investigated for child abuse.

Aside from the physical marks of abuse on the body of the victim, further medical examinations revealed she also suffered a fracture of the left arm and malnutrition.

The suspect during police interrogation claimed that the fractured arm was as a result of the child falling. Asked about the bruises, Nora said she noticed them some time ago and applied various ointments on them to heal them.

The suspect who has a 3-year-old daughter of her own said, aside from her daughter and the victim, she has two other children aged 11 and 15 from a late sister under her roof whom she’s taking care of.

Nora Fumador who operates a provisions shop aside from her sewing business however insisted that she’s not encountering any financial challenges in catering for the four girls despite the child being malnourished.

She told police that her sister who lived in Sogakope in the Volta Region brought the child two years ago to live with her. She however added that she has been unable to reach her over the past year and does not know her whereabouts.

Denying that she ever beat or tortured the girl, the suspect disclosed that she first sent the child to a herbalist at Kpong who began treatment on her broken arm before directing her to take the victim to the hospital for medical attention.

Dr. Stephen Kusi, Medical Superintendent in charge of the St. Martin de Porres hospital at Agomanya told GhanaWeb that the child suffered “multiple injuries all over the body from the head to the legs and feet, the abdomen and the back, including a fracture of the left arm. The child is ill but stable,” he disclosed adding that the facility was doing its best to give the best of treatment to the girl.

The Medical Superintendent continued that POP would be performed on the broken left arm, as well as the treatment of the bruises all over the body which are at different stages of healing, presumably evidence of torture over a period of time.

“We cannot confirm if the child was abused or otherwise. I believe that is the work of the police to investigate and find out,” said Dr. Stephen Kusi.

Though the child is in a stable condition after her wounds were dressed he said her blood level was low, necessitating the facility to transfuse some blood to her on Monday.

Currently, the chaplaincy of St. Martin’s Hospital has taken up the responsibility for the child’s welfare.

The facility, if the need arises would liaise with the police authorities to get another relative to take up the responsibility for the upbringing of the child.