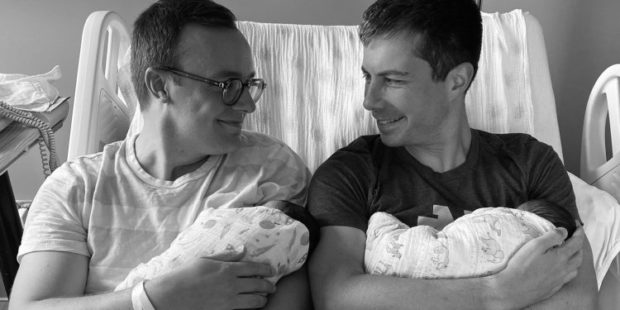 The Minister in charge of Transportation in the United States, Pete Buttigieg has announced the birth of his two children. The 39 year-old former mayor shared the news on his Twitter account.

He shared an intimate picture with his husband, Chasten and twin kids, a boy and a girl relaxing in a hospital bed.

“Chasten and I are beyond thankful for all the kind wishes since first sharing the news that we’re becoming parent. We are delighted to welcome Penelope Rose and Joseph August Buttigieg to our family.”

The Cabinet Minister in the Biden government had shared last month that he and his 32 year old husband, Chasten are almost done with the adoption process even before they were born.

While the majority of comments were congratulatory messages to the couple, some conservatives have fired the couple for putting their new babies in an awkward family in the absence of a mother.

He abandoned his bid after performing poorly and threw his weight behind Joe Biden who subsequently made him a minister after he defeated Trump.

Here are the leading Black celebrity investors in the world