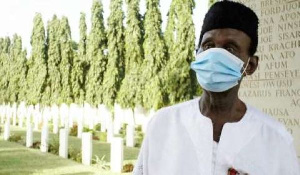 A 95-year-old World War Two veteran, Pte Joseph Hammond from Ghana, has sent a video message to fellow Burma veteran Capt Tom Moore, asking him to send a message to other veterans in Africa.

In the message he said:

“I fought in second world war in Burma, just like you, and I have been inspired by what you did in Britain to raise funds for the people.”

The war veteran Capt Tom raised more than £32m ($30m) for NHS charities by walking 100 laps of his garden before his 100th birthday in April.

Inspired by this, fellow war veteran Pte Joseph then walked two miles a day around Ghana’s capital Accra, for a week, finishing his challenge in Monday.

He raised just over £21,000 for front-line workers and veterans in Africa.

In the video message he said: “I would appreciate a note from you to share with my colleagues, the veterans in Africa.”

He is one of thousands of Africans, then under colonial rule, who fought for Britain in World War Two.

Related Topics:GHANAIANtwoUKveteranWORLD WAR
Up Next

Clashes escalate after death of US man in custody