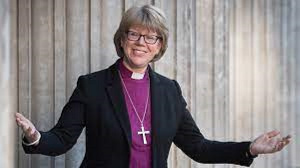 Bishop of London (head of London’s Anglican church), the Rt Reverend Sarah Mullally has been served a dose of the Sam George clapback after she made a post about Ghana’s anti-LGBTQ+ bill.

Bishop Mullally who is a member of the United Kingdom’s House Lords in a tweet on Wednesday, October 27, 2021, criticized the bill and called for its rejection.

According to her, the bill is a threat to the lives of LGTBQ+ persons and must not be allowed to pass.

“Ghana’s proposed anti- LGBT legislation is unacceptable and must be resisted. It would promote fear and intolerance, putting the freedom of so many people under threat. We are all love equally by God. My prayers are with the LGBT community in Ghana at this time,” she tweeted.

In a rebuttal, Sam Nartey George who is the lead spokesperson on the Promotion of Proper Human Sexual Rights and Ghanaian Family Values Bill, 2021 dared Sarah Mullally to mention an aspect of the bill that supports her claims.

Sam George further quizzed if the Anglican church leader had read the bill which is currently before the Constitutional, Legal and Parliamentary Affairs Committee of Parliament.

“Dear @bishopSarahM would you be kind enough to tell me what specifically I the Bill is unacceptable and must be resisted? Have you actually read the Bill yourself?’ he quizzed.

He ended with “my thoughts & prayers are also with the many young boys who have been sexually exploited by some of your priests.”

Bishop Sarah Mullally was restating a position by the Archbishop of Canterbury Most Reverend Justin Welby that the Anglican church is against the anti-LGBTQ+ bill. Archbishop Welby said he was going to speak to the leadership of the church in Ghana to kick against the bill.

“The majority of Anglicans within the global Anglican Communion are committed to upholding both the traditional teaching on marriage as laid out in the 1998 Lambeth Conference Resolution I:10, and the rights of every person, regardless of sexual orientation, before the law. In Resolution I:10, the Anglican Communion also made a commitment “to assure [LGBTQ+ people] that they are loved by God and that all baptised, believing and faithful persons, regardless of sexual orientation, are full members of the Body of Christ. Meanwhile on numerous occasions the Primates of the Anglican Communion have stated their opposition to the criminalisation of same-sex attracted people: most recently, and unanimously, in the communiqué of the 2016 Primates’ Meeting.

“I remind our brothers and sisters in the Anglican Church of Ghana of these commitments.” 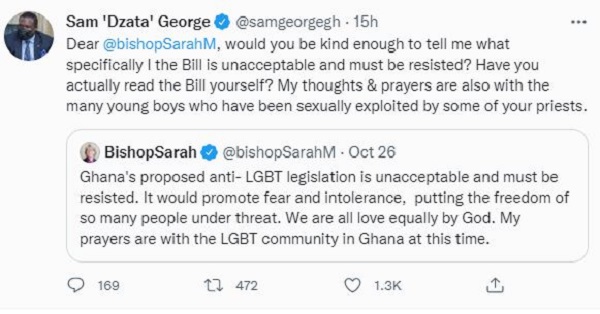