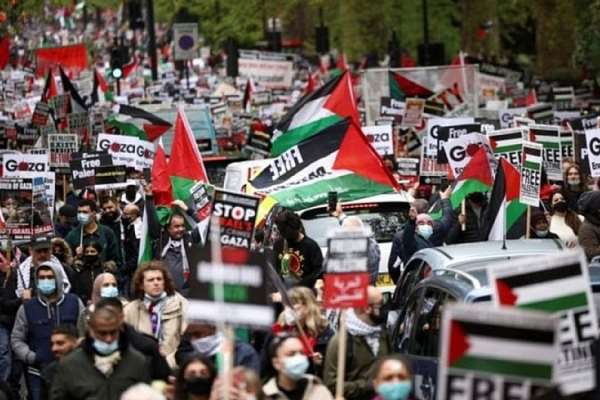 Scores of UK citizens believed to be Palestinians gathered at Northampton to demonstrate their displeasure towards the seemingly unending enmity between Israel and Palestine which is leading to the death of innocent people in the two regions.

Earlier today, it was alleged that Israeli troops fired weapons into the thirteen-floor storey building housing the Aljazeera News network and US News in the Gaza Strip which has caused massive destruction in the region.

Bckground and More details
Thousands of people marched through central London on Saturday to express solidarity with the Palestinians in Gaza.

Organisers said immediate action is needed from the UK government to help end the brutal violence.

Saturday is the Palestinian Nakba day, the anniversary of the expulsion of hundreds of thousands of Arabs from their homes more than 70 years ago.

A boy waves a Palestinian flag next to red London buses

Crowds marched through Hyde Park before arriving outside the gates of the Israeli embassy in Kensington.

A temporary stage was set up on Kensington High Street and organisers urged people to keep moving down the road as numbers continued to swell and dozens of police officers lined nearby streets.

The Metropolitan police said they had a plan in place “to ensure everybody is kept safe and to reduce the spread of Covid-19”.

Jeremy Corbyn, the former Labour party leader, told crowds gathered outside the gates of the Israeli embassy that international action provides comfort and support to those suffering in the conflict.

“Think what it’s like being a mother or father and seeing a building bombed in front of you, knowing your family is in there, and you can do nothing,” he said.

“It’s our global voices that will give succour, comfort and support in those settlements alongside Gaza and all over the West Bank, East Jerusalem who are suffering at this time.

“End the occupation now. End all the settlements now and withdraw then. End the siege of Gaza now.”

The former shadow home secretary, Diane Abbott, told crowds that they were part of a “worldwide movement for justice”.

“Palestinian people are having their land seized … and they are now being killed in their homes. All of this is illegal.

“Today we are saying enough, enough with the complicity. Thank you for standing with us.”

The demonstration was organised by Palestine Solidarity Campaign, Friends of al-Aqsa, Palestinian Forum in Britain, Stop the War Coalition, Campaign for Nuclear Disarmament, and the Muslim Association of Britain.

A spokesperson said: “It is vital that the UK government takes immediate action. It must stop allowing Israel’s brutal violence against and oppression of the Palestinian people to go unpunished.

Thousands march in Free Palestine rallies in Sydney and Melbourne

Read more
“The bombardment of Gaza, which is killing civilians including children, is a war crime. It is occurring in the context of the illegal forced displacement of families in Jerusalem and attacks on Palestinian citizens of Israel by far-right groups including illegal settlers from the West Bank.

“The UK government is complicit in these acts as long as it continues to offer Israel military, diplomatic and financial support. Such support must end with a minimum start being an end to the two-way arms trade and trade with illegal Israeli settlements.”

Husam Zomlot, the Palestinian ambassador to the UK, told crowds on Saturday: “This time is different. This time we will not be denied any more. We are united. We have had enough of oppression.

“Today we are saying enough, enough with the complicity. Thank you for standing with us.” 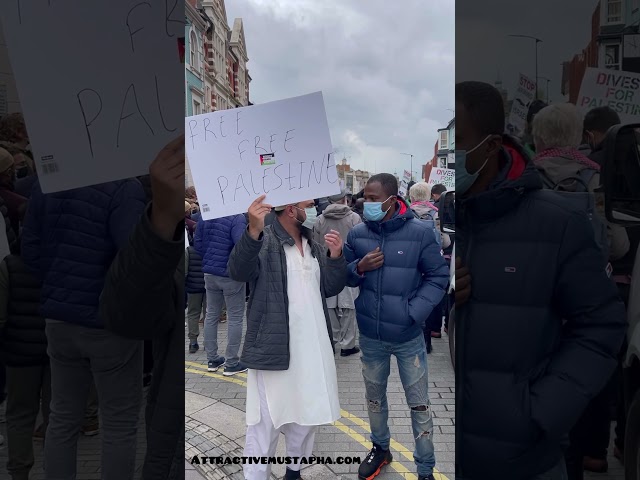