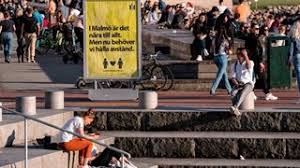 Sweden’s GDP fell more than its Nordic neighbours in the second quarter of 2020, dealing another blow to its lockdown-free coronavirus strategy.

In comparison, Finland’s statistics body said that its Q2 GDP was down 3.2%, and Denmark’s said GDP there was down 7.4%.

Norway’s GDP also appears to have fallen less than Sweden’s, though its measurements are out of sync with other nations. Its GDP fell 7.1% from March to May, a timeframe one month earlier.

Finland, Norway, and Denmark implemented lockdowns more in line with other nations, severely restricting the movement of people while closing schools and businesses.

Experts say that the outcome of Sweden’s strategy is best compared to these countries, given their similar demographics, culture, and political systems.

Earlier in the year, some commentators and protest groups in the US suggested that Sweden’s example should be followed to protect jobs and the economy.

However, authorities in Sweden have said consistently that this was not their rationale.

Anders Tegnell, Sweden’s chief epidemiologist and the architect of Sweden’s plan, said that economic considerations were not a factor in avoiding a lockdown.

Instead, Tegnell said Sweden hoped to create a long-lasting approach that could be sustained far longer than a total lockdown.

Mikael Bask, an economist at Uppsala University told Business Insider last month that Sweden’s economy was hurt by shorter store opening hours and reduced footfall, even though they stayed open.

Beyond economic damage, the human cost in Sweden has also been worse than its neighbours.

Sweden’s deaths are high
Sweden has now seen 5,776 deaths among its population of just over 10 million.

Its death rate was once one of the world’s highest, and is now still significantly higher than its neighbours: more than five times Denmark’s, more than 11 times Norway’s, and around 10 times Finland’s.

Those three countries have now, like the rest of Europe, eased some restrictions, while Sweden has kept its same rules in place. The effect that is in many respects Sweden’s rules are now stricter than those of other nations.

The daily rate of new COVID-19 infections in Sweden has fallen dramatically from its peak, though per-capita it is still higher than in many other European countries.

Norway, Finland Denmark are now starting to see a rise in cases, though they have been past their peak for much longer than Sweden now has been.

Tegnell told the UK’s Observer newspaper on Sunday that he was still not sure what strategy is best, though he has defended Sweden’s decision to stay on its path.

“It will be very difficult to to achieve any kind of really clear-cut answer as to what was right and what was wrong,” he said.

“I think we’re talking years into the future before we can get any kind of consensus on how to deal with this in the best possible way.”

Greece secretly sent away more than 1,000 migrants, abandoning them on the open sea