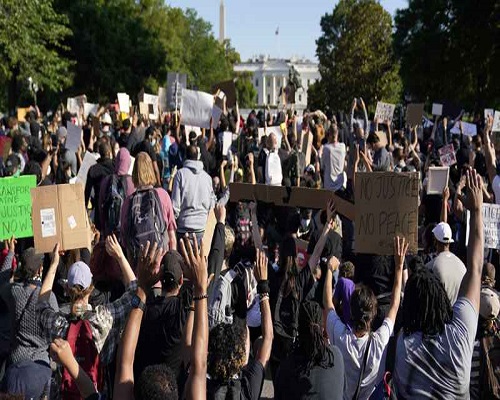 ensions are building in Washington DC as violent clashes begin amid fears of civil unrest. Protesters, many part of the Black Lives Matter movement, squared off with officers outside the White House on election night. Two men were detained as some demonstrators kicked police bikes, and a baseball bat was even used in a fight. Chants of ‘f**k the police’ and ‘no justice, no peace’ broke out as many in the thousands-strong crowd demanded officers release the men.

Officers on bikes formed a barrier to stop protesters from forcing their way through. The men were detained outside the Labourers’ International Union Building, but it is not yet clear why. Gustaf Kilander, who is on the ground in Washington DC for Metro.co.uk, said: ‘The men were led away as protesters yelled at the officers to let them go. ‘When the police had left the scene a second fight broke out, as two people were surrounded by photographers and onlookers. Protesters clash with police in Washington DC Play Video Loaded: 0% 0:00Progress: 0% PlayMute Current Time0:00 / Duration Time2:05 Fullscreen

‘The second fight was finally broken up when a small explosive went off with a bang, leaving a cloud of smoke in the air.’ This appeared to be the first point of significant tension despite earlier preparation for violence. Buildings in downtown DC have been boarded up while the White House is protected behind a fence.

Earlier in the evening saw peaceful protests, with supporters of Donald Trump and Joe Biden mixing with no problems. But one preacher obstructed an anti-Trump flag being carried along the street. Officers on bikes formed a barrier to stop protesters from forcing their way through (Picture: Gustaf Killander) A banner in the Black Lives Matter Plaza reads: ‘Trump lies all the time’ (Picture: AP) Two men were detained as some demonstrators kicked police bikes and a baseball bat was even used in a fight (Picture: PA) Earlier protests were fairly peaceful until the evening got later (Picture: TASS) As temperatures dropped, some people gathered around a projector showing TV news. Bernadette Eichelberger, a 68-year-old retired healthcare worker, admitted waiting for results had frayed her nerves.

She said she has spent much of the last week phoning potential voters for Joe Biden, and is fearful of what another victory for Donald Trump will mean for the country. ‘I’ve been worried for the last year,’ she said, ‘I’ve been sick for the last four years of what he’s done to this country. It would only get worse – we will become a fascist country if he gets elected.’ Other more scattered protests have been taking place across the rest of the US, from Seattle to Minneapolis.

US 2020 ELECTIONS: Update From All States