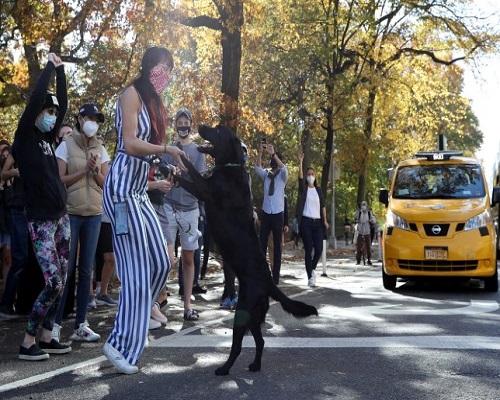 Huge cheers and celebrations erupted on the streets of major US cities within minutes of Joe Biden being announced as the next president. The news was greeted with wild celebrations by Democrat supporters who have been following every twist and turn of the election count. People have been seen dancing in Black Lives Matter plaza in Washington DC while loud cheers could be heard across New York – the city where Donald Trump was born.

Crowds were equally loud in Philadelphia, where supporters of the two presidential candidates have been lining the streets waiting for news who has won the key swing state of Pennsylvania.

People hug on the streets of Manhattan, in New York City (Picture: Reuters)

People dance on their balconies in Manhattan, in New York City (Picture: Reuters)

A couple hug in Philadelphia as Joe Biden is announced as the winner of the US presidential election (Picture: AP)

People celebrate on the streets of Philadelphia (Picture: AP)

Crowds erupted into cheers in the key swing state of Pennsylvania (Pictures: Reuters)

People gathered at Black Lives Matter Plaza celebrate to the announcement that the presidential race had been called in Joe Biden’s favor (Picture: AP)

Donald Trump refuses to accept Joe Biden as President and says: ‘This isn’t over’

Breaking: Joe Biden Wins US Elections to become the 46th president of the United States