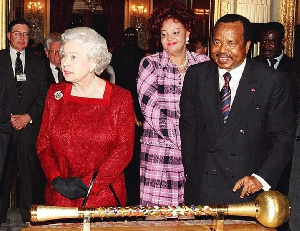 The ‘post’ was automatically conferred on the 89-year-old following the death of the United Kingdom’s Queen Elizabeth II on the same day.

Buckingham Palace announced that the queen died peacefully at Balmoral in Scotland at the age of 96.

Paul Biya will not be left out of world leaders condoling with the Royal family over the passage of the Monarch who ascended to the throne at age 25 and reigned for seven decades.

“The death of Her Majesty Elizabeth II is felt painfully and affects the Commonwealth of Nations. She had a unique stature and played an emblematic role throughout history,” Biya’s tweet read.

The 89-year-old has been President of the Central African country for the last 40 years and counting.

Before becoming president, he had served as Prime Minister for seven years to the country’s first president Amadou Ahidjo.

The world’s longest-serving leader, Her Majesty Queen Elizabeth II, was pronounced dead on Thursday, September 8, 2022, via a statement from the royal family.

She became queen at the age of 25 and remained on the throne for seven decades before her death.

Queen Elizabeth’s eldest son Charles, 73, has been named successor and by that become the King of the United Kingdom and the head of state of 14 other realms including Australia, Canada and New Zealand. His wife Camilla becomes Queen Consort.

Previous LIVESTREAMED: Charles III takes oath as he is proclaimed King of England
Next Nogokpo is a place of justice, not death and curses – Fiifi Kwetey