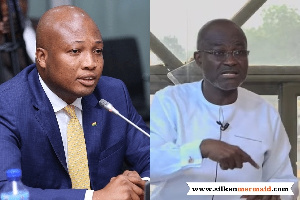 According to Ablakwa, it is worrying that some MPs absent themselves from the House beyond the Constitutionally accepted limit and that there is the need for reforms for the House to cure the development.

Ablakwa has recently threatened to drag Agyapong and two other New Patriotic Party MPs before the Privileges Committee for absence without permission for more than 15 consecutive days threshold – the two others are Dome-Kwabenya MP, Sarah Adwoa Safo and Ayawaso Central MP, Henry Quartey.

Reacting to the ‘threat’ on Oman FM, Kennedy Agyapong explained that he had been absent for 18 straight days in 2021 for medical reasons and that he had all his medical records intact.

Commenting on his explanation on February 26, Ablakwa stated: “I read that the Honourable Kennedy Agyapong has confirmed this (absence) and says that his medical records are intact, so he is waiting to prove to the Privileges Committee that he had justifiable grounds….

“That is not my reading of the Constitution and when I read Professor Kwaku Azar’s judgment, that is not the understanding I am getting. Once you have crossed 15 days, there is no salvation for you,” he stressed.

He also lamented why the MPs will simply not request permission from the Speaker adding that such disclosures of extended absenteeism expose the entire Parliamentary class to public censure.

“People then say that we vote for these guys, they don’t show up in the House. We should earn our keep and stop subjecting ourselves to such ridicule.”

Ablakwa also believes it is time Parliament puts in place inherent mechanisms to check the absenteeism, “as an institution, we should carry out reforms and deal with it.”

Previous Ghana, Nigeria match: No vaccination card, no entry into stadium
Next LIVESTREAMED: Joe Biden warns Putin, stands with Ukraine in State of the Union