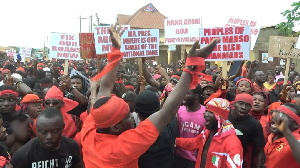 Bad roads have crippled life in Pakyi Number 1 and Pakyi Number 2, according to residents in the Amansie West District towns of the Ashanti Region.

Hundreds of youth in these twin communities staged a demonstration on Thursday (14 April 2022), blaming the Akufo-Addo-led administration for failing to fulfill its 2016 and 2020 campaign promises of fixing the roads in the area.

The protesters, some of whom wielded placards with inscriptions such as: “We need nothing but good roads”, We need your help Nana Addo, NPP is deceiving Ashantis”, Mr. President, where is our share of the national cake?”, among others, marched through the principal streets of Pakyi to press home their demands.

Security was beefed up when the protesters finally converged at the Pakyi Number 2 Presby ‘B’ School where the organizers took turns to address the crowd.

One of the leaders of the demonstration who doubles as the assembly member for Pakyi Number One, Kusi Obuadum William, attributed “rampant” armed robbery cases and accidents in the area to the terrible state of their roads.

“Recently, the government came out to say that 10,875 kilometers of roads have been constructed within Ghana. When you come to Amansie West District, that is Manso Nkwanta Constituency, particularly within Pakyi and its environs, none has been constructed here. Are we not part of Ghana?”

The residents have vowed to launch series of actions against the government until their demands are met.

A local chief said: “We first approached the District Chief Executive for Amansie West. We also went to the Ashanti Regional Minister before going to the Minister of Roads and Highways. We have gone through all these processes. About a week ago, the Road’s Minister came to the Ashanti Region where traditional authorities here and the assembly members went to meet him, but it was unsuccessful. That is even why we decided to embark on this demonstration. The MP even asked the roads minister. We realized that we have not been captured in the budget. Should we embark on demonstrations before government addresses our concerns? Why have other neighboring communities had their fair share, whereas we have been shortchanged?”

“It means the people have to stop voting, since they won’t vote for the NDC. Although I am a chief, I am an NPP member. I am even a government appointee at the district assembly, but we have to say the truth”, he added.

Tags ARE deceiving US you