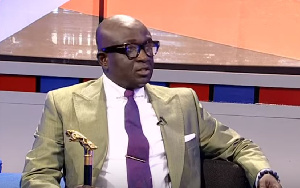 As remedies for the perennial flooding in the country are discussed, ace Master of Ceremonies, Kwasi Kyei Darkwah has asserted that he no longer blames citizens for the canker but leadership for refusing and failing to do the needful.

The showbiz personality who was once a broadcaster is of the view that while it is incontrovertible that activities of citizens such as illegal structures on waterways, improper disposal of refuse, silting and choking of drains, among others are causes of floods, the narrative would have changed if persons found culpable are arraigned before the courts and punished if found guilty.

The outcome of such court cases, according to him, would serve as a deterrent to others and subsequently bring an end to the perennial flooding situation. He mentioned that the government cannot be cut some slack, stressing that the seeming nonchalant posture of the leadership is repugnant.

“If you are a shepherd, you must create your environment in a way as to bring the stupid ones amongst you up. I’ve had this discussion with too many people; I’m tired. I don’t blame citizens anymore; I blame leadership,” KKD said on GTV’s breakfast show, Wednesday, monitored by GhanaWeb.

Drawing an analogy to back his submission, KKD said “If you live in a home where a boy goes to defecate in the sink, the first time he does it, you can say he’s just a silly boy. But if he does it continuously for more than a week, then you must say the elders in the home are silly.”

“Who are the elders in the home? What are the systems they have put in place for people to follow? Why is it that we have a police service, we have crime misdemeanours, rehabilitation and punishment and we don’t see people who are throwing litter in the street being arrested, being made to do community service, and that community service is essentially distilling the gutters, helping to dig the dirt from the lagoon, helping to collect the rubbish along the motorway; but they just walk scot-free and we say ‘the citizens’”.

“We can’t live like animals. In fact, it’s an insult to animals when I say we can’t live like animals because the animals don’t litter; it is human beings that litter. We have systems in place that should deal with recalcitrant ones in society. If those systems refuse or fail to work, then essentially, the government is encouraging stupidity in the citizens,” KKD added.

Various parts of the capital of Ghana were left in ruins after heavy rains poured from the evening of Monday, May 23, 2022, to about the early hours of Tuesday morning.

As usual, parts of the capital were flooded after just a few hours of rain on Monday evening and videos of cars submerged in water, kiosks floating atop flood waters, and roads flooded had taken over social media platforms.

Meanwhile, the Ghana Meteorology Agency has said three more heavy rain will hit the southern part of the country before the end of June.

“At the peak of the season for the southern part of the country, especially in the month of June an average of three major rainfall incidents such as what happened on Saturday occur. So on average, we are expecting about three,” he said on Joy FM.