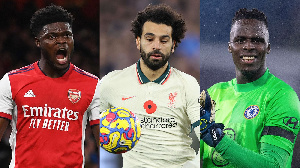 The AFCON is the second oldest continental competition after Copa America

The first two months of the year 2022 would not go down well with some English Premier League clubs who are competing for top spots in the ongoing league.

Title contenders Chelsea, Manchester City, and Liverpool will be playing the early part of the second round without their African contingents.

The 33rd edition of the Africa Cup of Nations will be staged in Cameroon in the coming year and as such African players whose countries have qualified for the tournament will join their national teams.

The Africa Cup of Nations will start from January 9 to February 6 2022 with 24 competing nations. With the tournament being the biggest on the continent, the countries will need their stars to turn up for the football festival.

With less than two months to the start of the second oldest continental competition, GhanaWeb brings you the top 11 players who will be missed in the English Premier League for the AFCON.

The Chelsea goalkeeper will join the Terenga Lions of Senegal for the AFCON and it will be a big blow for the European champions.

Mendy is viewed as one of the best goalkeepers in the world following his outstanding performance for the Blues and will be missed in games against Liverpool, Manchester City, Brighton, and Tottenham.

The Morocco international who has been in good form for Chelsea will also join his national team and that will reduce the attacking options for Thomas Tuchel in his absence. The Moroccans are in the same group with the Black Stars.

The Black Stars deputy captain will leave the Gunners and join his Ghanaian brothers for the Africa Cup of Nations.

Thomas Partey is an integral member of the Arsenal team and his absence will create a big hole in the Arsenal midfield.

Arsenal will lose their captain Aubameyang who also doubles as the captain of the Gabon national team and the Gunners will more in January as they have quite a number of the African contingents.

Liverpool boss Jurgen Klopp has already started complaining as he will lose his big stars to Senegal, Egypt, and Guinea. Sadio Mane will be playing in the AFCON with Senegal.
Mohammed Salah

Just like Sadio Mane, Mohammed Salah who is the current top scorer in the English Premier League will join the Pharaohs who are hoping to end their ten-year wait for an AFCON trophy. The last time Egypt won the AFCON was in 2010 against the Black Stars.

The Guinean international is the third player who will leave the camp of Liverpool to join his country for the Africa Cup of Nations from January to February.

The Algerian will lead the Desert Foxes as they aim to defend the trophy they won in 2019 after beating Senegal. Riyad Mahrez will lead Algeria to win their second continental trophy after 1990.

Zaha is the poster boy of the Ivorian national team and will be a big blow for Patrick Viera as Crystal Palace will miss their leading marksman.

Ghana will be hoping to end its long wait for the Africa Cup of Nations trophy and Jordan Ayew will play a role to ensure that the Black Stars win the trophy.

40 Premier League players potentially being called up for duty for the tournament in Cameroon.

The winger has found minutes hard to come by at Arsenal this season but will still be needed in the cup games.

He adds to the Arsenal entourage of Aubameyang, Elneny, and Thomas Partey who will be missing the AFCON.

Also, watch last week’s episode of the Friday debate on GhanaWeb TV with Joel Eshun in the post below:

Related Topics:PLAYERSWORLD CUP
Up Next