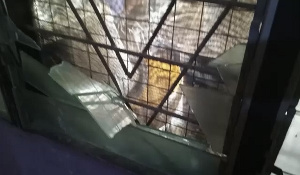 15 men vandalized an entire household in an attempt to extort money from the family of a boy alleged to be a thief.

According to Maame Adutwumwaa, the mother of the 17-year old boy Moses, who was alleged to be the thief, her son returned from work Friday evening around 8pm. Upon his return from work to the house, he was sent by his mum to buy oats for her.

A few minutes after his return from the errand, there was an attack in the household by gang men banging doors looking for Moses claiming he is a thief.

“When Moses returned from the errand, he immediately when to his room to sleep but he was tired. I heard doors banging so I quickly rushed out to see what was happening only to see 15 gang men looking for my son, Moses indicating he is a thief”, the mother narrated.

She added that “the men demanded that I pay GHC3000 or else the household would be vandalized. I insisted we don’t have that money besides my son is not a thief. The gang immediately gushed into our room vandalizing doors, louver blades, household equipment just to have Moses in their grip.

“I have together with his father struggled with them but they overpowered us and later got Moses. The gang beat him mercilessly and decided to take him out of the house,” Maame Adutumwaa added.

The mother, Maame Adutwumwaa is calling for proper investigation into the matter to unravel the fact that her son 17-year-old Moses is not a thief but the men were armed robbers whose aim was to rob their household rather framed these malicious plans.