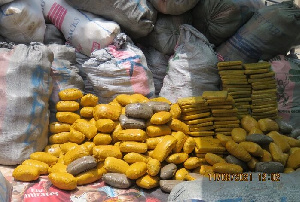 20 Ghanaian fishermen have been sentenced to one-year imprisonment each by the Federal High Court in Lagos State in Nigeria on Thursday, August 4, 2022.

The men were jailed for transporting 13.670 kilogrammes of marijuana, aka cannabis, from Ghana to Nigeria.

The court found them guilty on the charges of conspiracy and unlawful transportation of the drug, Nigeria’s punch reports.

The above people were arrested on the Nigerian territorial waters on January 14, 2022 with drugs from Ghana.

In court, the prosecutor, Mr Fingere Owen, said their crime was contrary to and punishable under sections 11(b) and 14(b) of the Nigerian National Drug Law Enforcement Agency Act Cap. N30, Laws of the Federation of Nigeria 2004.

The convicts however pleaded guilty while their lawyers pleaded to the court for mercy as they are first-time offenders.

Their lawyer said the fishermen had no idea of the content in their bag after they engaged a customer.

Based on this, Justice Nicholas Oweibo sentenced them to one-year imprisonment. He also ordered that the convicts pay the sum of N50,000 each in lieu of the sentence and ordered that the boat used in smuggling the banned substance be forfeited to the Federal Government.