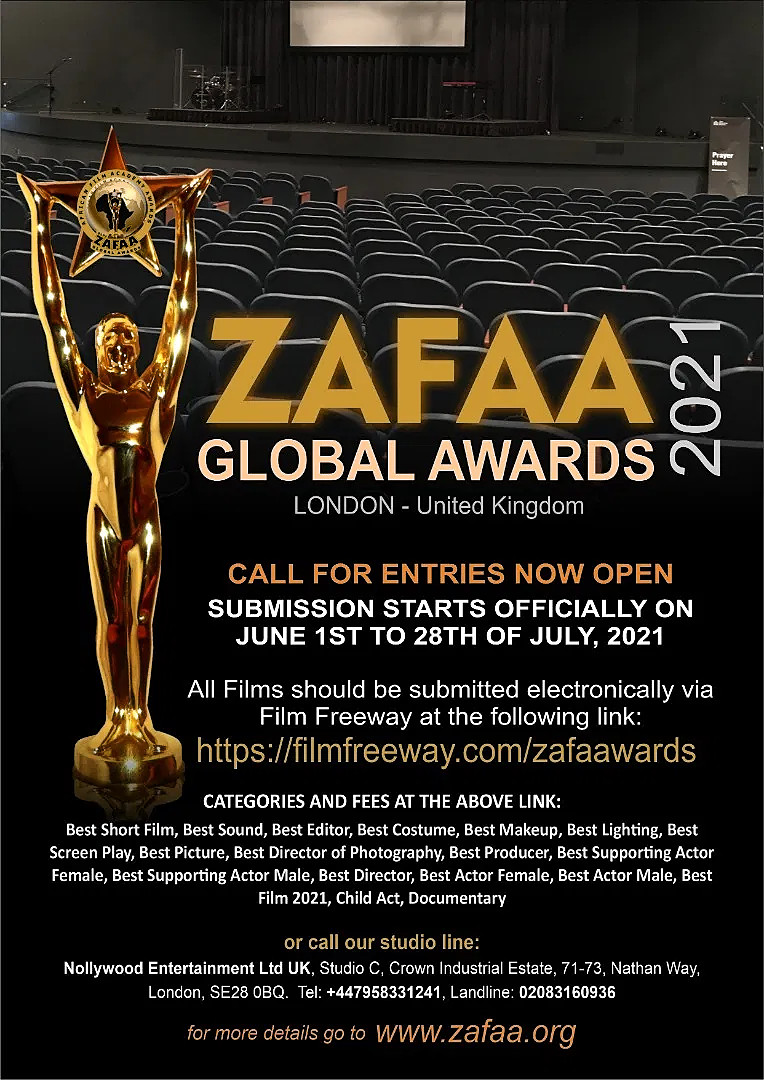 The African Film Festival and Academy Awards also known as ZAFAA Global Awards is a highly regarded film event in the UK. ZAFAA Global Awards was held in Lagos Nigeria for the first time in collaboration with Nigerian Television Authority (NTA) and is ready to be hosted in any African Country to promote African Cultural Heritage for the big exchange – the Biggest Tourist Festival is taking place in the global business capital – London UK.

ZAFAA Global Awards from Diaspora’s perspective, dedicated to promoting African movies and entertainment industry makers to the outside world. It is the biggest African Film Festival ever that attracts crème de la crème of African International stars outside of Africa, to meet and socially meet-one-on-one, deliberate, network during and after exhibition of Africa’s post colonial culture the ZAFAA Global Awards is always ready to make it happen again but not without the energy of all of you – the King makers and professional promoters around the world.

ORGANIZERS:
Nollywood Entertainment Limited UK, is a body registered in England & Wales in association with ZAFAA Global Awards, both entertainment companies also registered in Africa to host ZAFAA in Nigeria in 2015.

Awards & Prizes
THE ACADEMY AWARDS:
• It is the high point of the event

• The Award is segmented into Film and Cultural brackets.

*Entries for the award must be submitted under the stipulated guidelines

1) All Africa movie makers within the film and video spectrum to submit their most recent audiovisual contents produced between the 1st of January 2019 to 30th of November 2020, for consideration under the different categories of the forthcoming 2021 edition of ZAFAA Global Film and Academy Awards for more visit http://zafaa.org

READ Photos: Husspuppi losses drastic weight in prison
2a) Filmmakers are required to submit their work in DIGITAL copy online through this platform (FilmFreeway) https://filmfreeway.com/zafaaawards/

2b) Fill the film application form at ZAFAA website at http://zafaa.org/filmregister/
and after successful form submission, a copy of the Film in a minimum of 1GB ZAFAA CLOUD DRIVE is provided after a full application is considered. (Call the following numbers for directive: UK: +44 7958331241 or NGR: +234 8033446000 and WhatsApp messages could be sent via numbers above)

3) ZAFAA Global Awards no longer accept Films in the following formats: VCD, DVD or Flash Drive, and any application received in such formats WILL NOT BE SCREENED or considered for nominations at the ZAFAA Global Film and Academy Awards.

4) Films in Native languages should be subtitled in English. Those without subtitles will not be accepted.

– Commercials and adverts are not accepted in the entered work

– All non-English language entries must be subtitled, including Pidgin English movies

– All entries must be watermarked in a way that it does not impair viewing during the screening by our Jurors.

– Be informed that Nollywood Entertainment Limited UK organisers of ZAFAA Global Awards is upgraded with multipurpose Studio and Online Android and WebAPP platform for income generation for only partners.

FOR INTERESTED PARTNERS TO BE
Zafaa TV is an online entertainment premium/free subscription online television platform. It is dedicated TV on the go for movies making it to the cinemas around the world and partners are given the opportunity for monetization of their contents. Zafaa TV is the Real Online African Movie Magic in addition to live archived industry movie update.