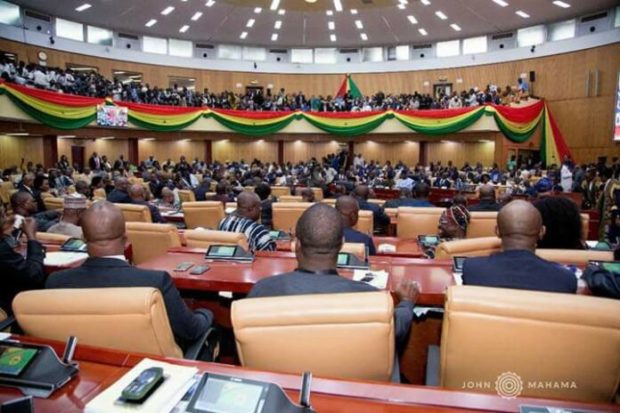 Majority MPs walked out of parliament

When, on Friday, November 26, 2021, this current 8th Parliament of the Fourth Republic made history by rejecting the 2022 Budget Statement and Economic Policy as presented to the House by the Minister of Finance, Ken Ofori-Atta, there were quite a number of people who had a thing or two to say about it.

Being the first time in this republic that any budget has been rejected, that was not quite the only major thing to have happened on the day.

Earlier in the day however, it had been rumoured that the Minority had vowed to reject the budget if two of their colleagues on the other side of the House, Kennedy Agyapong, and Sarah Adwoa Safo, Members of Parliament for Assin Central and Dome-kwabenya constituencies respectively, not show up for the vote.

As it would turn out later, only the Assin Central MP showed up for the vote but that vote never quite happened because the very side of the House whose motion was to be voted on – the Majority, walked out of the House.

They insisted that with the General Secretary of the opposition National Democratic Congress, Johnson Asiedu Nketia, still in the House, they would not vote. It must be stated that the NDC executive also sits on the Parliamentary Service Board as a member.

But then, the conversations moved further outside the very precincts of the Parliament House.

So, which prominent names have made comments on any or some of the events of the Agyenkwa Budget rejections? Here are some of them:

According to A Plus, the NPP has proven to have expertise at abandoning a number of things including projects and a party office for that matter.

He posted his views on the incident in a Facebook post, hours after the budget was rejected. He also chastised the Majority’s reported reason for walking out – the presence of the General Secretary of the opposition NDC in the public gallery of the House.

“How can one person sitting in the public gallery of parliament where the media and other citizens are seated, cause the majority to abandon such an important sitting.

“I’m not surprised koraa. If they can abandon projects including their own party office, why won’t they abandon this? I told you that way these guys like abandoning things, let’s change their name to Abandenden People’s Party,” his post read

A presidential staffer, Charles Nii Teiko Tagoe, decided to blame the processes and the people involved in those processes to electing MPs for the various constituencies around the country.

“Instead of blaming the speaker of parliament and the minority NDC, please blame your constituency chairmen, regional chairmen and some regional ministers who decided to campaign against their own parliamentary candidates because the preferred aspirants lost the parliamentary primaries,” he stated in a Facebook post.

“Blame those regional and national executive who overtly and covertly disqualified some parliament aspirants because they want their preferred aspirants to go opposed.

“Not only are we quick, but we take so much delight in bringing each other down. The brother against brother and pull him down in this government and party is simply unbelievable. The end results is the sorry state of the number of parliamentarians we have in Parliament of Ghana today,” he further added.

In his reaction to the rejection of the budget, leading member of the New Patriotic Party (NPP), Gabby Otchere Darko, said that it was the work of the opposition to oppose.

Rejecting a national budget means for that budget year there will be no money to spend on anything by Government, including wages; no cash for roads, schools and hospitals. It means no show!

“The argument that after presenting your case on a matter in Parliament it was too late for the majority to walk out since the speaker was seized with jurisdiction to put it to vote is flawed. Parliament is not like the courts; the Speaker is equally not like a Judge. Whereas in Court, the Judge could deliver a decision if you walk out after submissions, the same cannot be said of the Speaker. The reason is simple: the power to decide matters in court lies with the Judge. But in Parliament, the power to decide matters lies with the members themselves. As such, if at the time of taking a vote, the total members present was not at least half of the membership of the House, that exercise is void; It is unconstitutional and thus of no effect.”

Dr. Poku Adusei added: “the ‘decision’ of Parliament yesterday over the Budget Statement, even though is brutum fulmen, gives a cause of action in constitutional law, and same must be vindicated to forestall its recurrence.”

Political science lecturer at the University of Ghana, Professor Ransford Gyampo, faulted the Minister of Finance, Ken Ofori-Atta, for failing to consult the leadership of parliament before the approval of the 2022 budget.

He said his last-minute attempt to request further consultation was an act of incompetence.

“What has happened is good for democracy. Nothing is lost. Real politique must commence now. Afterwards, some very minor revisions and tweaking of the budget in relation to comments and suggestions from inside and outside parliament should get the statement passed quickly for governance to go on.”

The President of Imani Africa, Franklin Cudjoe, in reacting to the budget rejection, said the engagement process for the preparation of the government’s budget statement should be re-examined.

“The rejection of the 2022 budget should lead to a re-examination of the pre-budget engagement process. For a budget that was to be read on Wednesday, 17th Nov., CSOs were e-invited almost midnight on Sunday, Nov.,14 for a meeting on Tuesday,16th Nov. for their views and expectations.

“Not much could have been achieved both ways. This was the first time though as previous engagements have at least been done 2 weeks prior to the reading.”

A former Chief Executive Officer (CEO) of the National Health Insurance Scheme (NHIS), Sylvester Mensah, described the attempts by Majority Members of Parliament (MPs) to label the public gallery as an extension of the floor of parliament as a “comic relief”.

“No amount of misrepresentations or propaganda by the NPP parliamentary group on why they walked out of the chamber, last night, would wash! Any attempt to make the Public Gallery an extension of the Floor of Parliament can only serve comic relief purposes!

“The reasons assigned for boycotting proceedings is as careless as it is irresponsible! We’re experiencing an abdication of moral leadership, Inadequate consultation toward annual budget presentations, and suboptimal policy judgement,” he tweeted.

A deputy finance minister, Dr. John Kumah, has disclosed that his outfit is ready to engage with relevant stakeholders to ensure that the 2022 budget statement and economic policy is approved by parliament.

According to him, the consultation will enable them to correct some errors they may have made ahead of the voting process on the budget.

“Let’s be objective about this matter and stick to the constitutional provisions of our constitution and respect each other within the law. Where we are wrong, we will accept it. Nothing has taken place as far as we are concerned. The budget has not been rejected, and we are going to have a quorum on Tuesday to decide on the budget. So, on Tuesday when we go back to the chamber, I believe that we will take the necessary steps to correct the errors that we may have made. We are prepared as a majority side to engage. So clearly, it will be better if we have more consultations on the budget and engage,” he said.

This is what the rejection of the 2022 budget means for Ghana, government