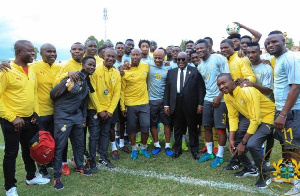 Ghana and Nigeria played out an intense goalless draw in Kumasi at the Baba Yara Sports Stadium on Friday night in the first leg of the qualifiers.

Speaking during his 28th televised address to the nation on measures Ghana has adopted to fight the novel Coronavirus, President Nana Addo Dankwa Akufo-Addo concluded his speech by wishing the team well and stated that the Black Stars gave a good account of themselves in the first leg.

“I wish the Black Stars, who gave a good account of themselves in Kumasi, the best of luck in Abuja on Tuesday,” he said.

The return leg of the World Cup qualifier will be played on Tuesday, March 29, 2022, in Abuja.