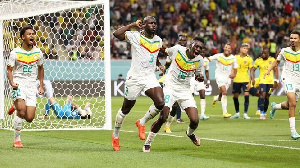 African Champions, Senegal have become the first African country to book their place in the knockout stage of the ongoing 2022 FIFA World Cup in Qatar.

Senegal picked one of the tickets for the knockout stage after beating the South Americans 2-0.

The Terenga Lions qualify for the next stage after beating Ecuador in their final group game at the Khalifa International Stadium on Tuesday, November 29, 2022.

Senegal took the lead in the game after Watford’s Ismaila Sarr in the 44th minute but Ecuador restored parity in the 68th minute after Brighton and Hove Albion tapped in a free ball from a corner Moises Caicedo.

However, Ecuador didn’t have time to celebrate the equalizer as Senegal captain Kalidou Koulibaly popped up in the box to restore the lead for the Terenga Lions.

Ecuador was in pole position to qualify to head into the game, knowing that a point would be enough to see them through to the round of 16, but the defeat to Senegal end their journey in the Mundial.

Else in the other group game, the Netherlands also qualify for the knockout phase as group winners after beating host nation Qatar 2-0 in their final game.

Previous Stop behaving like a village chief, we are not your subjects – Martin Amidu ‘warns’ Bagbin
Next Natural And Home Remedies For Curing Cough