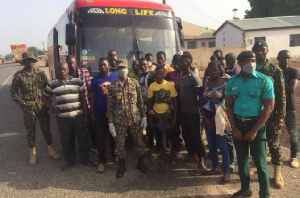 Twenty-three Burkinabes who entered Ghana through unapproved routes at Nandom in the Upper West Region were arrested and repatriated by personnel of the Ghana Immigration Service (GIS), on Wednesday.

The migrants were arrested at the Babile Checkpoint by the GIS personnel when the buses on which they were travelling were impounded.

In an interview with the Ghanaian Times at Wa, on Wednesday, the Regional Public Relations Officer for the GIS, Immigration Control Officer, ICO Ibn Yussif Duranah Abdul-Mumin Seidu, said the personnel initially arrested three males on Monday in a minibus with registration number AE-3062-13 en route to Techiman in the Bono Region.

He said that the remaining 20 migrants who were aged between 18 and 25, were arrested on Tuesday onboard an OA bus with registration number GR-6499-09.

ICO Seidu said the migrants upon interrogation, revealed that they were travelling to Techiman and Sampa as well as Kumasi in the Bono and Ashanti Regions respectively.

“The migrants were transported to Hamile on Wednesday to enable the sector command at the main Ghana-Burkina Border, conduct the necessary health screening and repatriate them immediately,” he stated.

ICO Seidu asked residents living along the border to collaborate with the service to ensure that the country was protected from needless spread of the Coronavirus.

He said the command was poised for action and would not compromise on its vigilance nor relent in its efforts at protecting the citizenry.

Ghana closed its sea, land and air borders on March 22, 2020 following a directive by the President Nana Addo Dankwa Akufo-Addo.