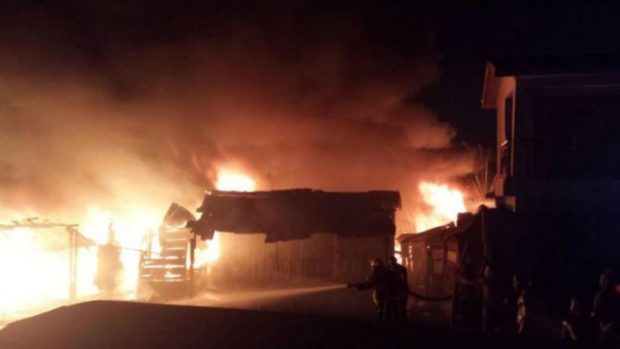 35 wooden structures razed to the ground at Darkuman

About thirty-five wooden structures at Darkuman Black Park in Accra have been razed to the ground after a fire outbreak on Wednesday afternoon.

According to sources, smoke billowed through the neighborhood as a result of the fire caused by a burning refuse.

Motorcycles, tricycles and other personal belongings have all been lost to the fire.

Speaking to Joy News, some victims who were hopelessly going through the rubble recounted their losses and appealed to authorities to come through for them with some relief items.

The latest outbreak follows another incident on February 4, which destroyed a two-storey building near the Internet Protocol Multimedia Communications (IPMC) tower at the Kwame Nkrumah Interchange (Circle).

According to eyewitnesses, the fire started around 6:00 am until it spiraled out of control.

They accused the Ghana National Fire Service of delaying to attend to the emergency, thus, resulting in more destruction.

“It took them an hour before they got here and even that, the first Fire Service vehicle that came first had no water in the tank,” an eyewitness told JoyNews.

Investigations have since commenced into the incident.

Tags 35 at Darkuman GROUND razed structures THE to WOODEN

Previous ‘So annoying’ – Sekou Nkrumah’s reaction to Akufo-Addo praise by TD Jakes
Next Cedi performance hits a snag, sells at GH¢7.09 as at February 17