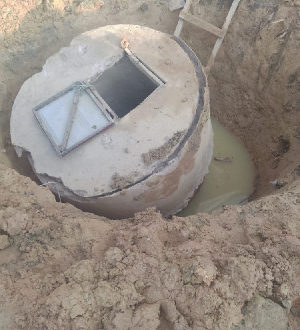 The Police in Wassa Akropong in the Western Region are investigating circumstances that led to the death of a 35-year-old, in a well in which he was working.

Kwabena Boateng is alleged to have been working on a well constructed for a client at Wassa Akropong when the misfortune happened.

Kwabena Boateng was called to fix the well which was leaking but in the process, the culverts in the well slipped on him while working to fix a problem.

According to a resident in the Area, Kwame Owusu, “I was going somewhere, so when I got to the well’s location, I heard a sound.

“Immediately a woman came out of a nearby house who said there were people working in the well. So, I shouted for help and lots of people came around so we could save the man. We tried with woods and other things to push the culverts aside so we can rescue him but that was not possible”.

He explained that “we went to look for a towing car to help us rescue Kwabena Boateng, but when the driver came, he said he could not do that without police’s presence so he left. So, I called a machine operator known as “One man” who came with a backhoe to push the culvert, where we were able to have access to him (Kwabena Boateng), but unfortunately, he was dead when we brought him out of the well”.