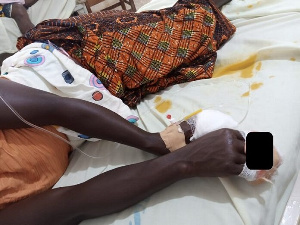 A 46-year-old farmer and hunter, Alex Quainoo has shot his wife, Victoria Asiedu after the latter failed to give him GH¢2 to buy alcohol and cigarette at Assin Bepokokoo in the Central Region.

Information gathered indicates that the suspect had earlier requested a torchlight to go on a hunting expedition. Upon his return from his hunting around 8pm on Easter Sunday, he demanded GH¢2 for alcohol but when the victim declined, an argument broke out.

The suspect then threatened to kill her and without provocation, he shot the victim in her two palms after missing the targeted neck.

The victim is currently receiving treatment at the St. Francis Xavier Hospital in Assin Fosu while the suspect is on the run.

The Assin South police command has mounted a search to arrest him.

Previous 8 persons injured in accident on Kwahu Atibie-Nkawkaw road
Next VIDEO: Akufo-Addo chills in Kwahu with his ‘squad’