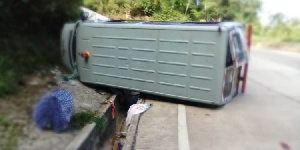 Eight people have been reported injured by citinewsroom, after a VW minibus travelling from Kwahu Atibie to Nkawkaw was involved in an accident.

The minibus with the registration number GE-6462-22, fell off the edge of the road while taking a sharp curve on the hill.

According to reports, the eight injured persons, comprising of 6 males including the driver, 2 females were rushed to the Holy Family Hospital in Nkawkaw.

The injured are currently receiving medical care and the police have visited them at the emergency ward.

A report from the Motor Traffic and Transport Department (MTTD) said, “Police visited the said hospital and met 8 victims comprising 2 females and 6 males including the suspect driver at the Emergency Ward receiving treatment.”

A total of 20 passengers were onboard the vehicle when the accident happened.