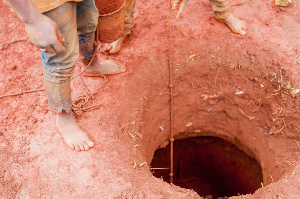 A 70-year-old man has reportedly committed suicide by jumping into a community well at Kukurantumi in the Abuakwa Municipality of the Eastern Region.

The incident according to a classfmonline.com report occurred on the night of Thursday, February 17, 2022.

The deceased identified as Kojo Owusu said to be a pensioner reportedly undertook the exercise that ended his life at around 10:00 pm.

The Municipal Director of the National Disaster Management Authority for Abuakwa, Samuel Owusu Osei, confirming the incident to Accra FM, explained that he received a late-night distress call about the incident.

Upon the arrival of NADMO at the scene, Mr Owusu explained that the well was filled to the brim; the body of the deceased was retrieved after the well was drained.

“We had to mobilise officers from the National Bureau of Investigations (NBI) and Ghana National Fire Service (GNFS) to have the water pumped out,” he explained.

According to the report, a nursing mother saw the old man hovering the well in the night and when she inquired from the deceased what he was seeking to do, she was told by the late Kojo Owusu to “mind her own business.”

The lady is said to have moved away only to spot the deceased jump into the well.