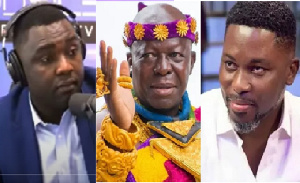 The Asantehene, Otumfuo Osei Tutu’s recent comments on taxes and taxation continue to elicit reactions from a broad range of public figures, on-air and online.

The latest are two prominent voices on social media, Kwame Asare Obeng, widely known as A Plus and Kevin Ekow Baidoo Taylor.

A Plus posted a photo shared by the Presidency with a quote of the Ashantehene stating: “I do not know of any form of taxes that is less painful than others. So at last, government, by all means, would have to raise taxes to meet our needs and if we are good citizens, we will pay our taxes.”

A Plus advanced the position of the school of thought that said paid taxes needed to be properly utilized by the government, he cited instances in the current government when he believed taxes were misused.

His response to the Monarch was as follows: “So that the government will use it to rent expensive jets? Use some to import a stone from Israel where they don’t believe in Jesus to build a cathedral? Not long ago our tax was used to build houses for judges.

“Akufo-Addo spent over 20 million to demolish all the buildings to pave way for him to build a house for his sky daddy. Why should we pay taxes to a government that wants to use it to buy a jet so that the president can bathe in the sky?

“Nana we love you but this one diɛ please come again. God bless you. Long live Otumfour,” he concluded.

For his part, Kevin Taylor while speaking on one of his widely followed Facebook broadcasts via the With All Due Respect page tasked the Otumfuo not to allow members of government to drag him into their politics and soil his reputation.

“Ghana is on the verge of collapse and you know this, you know more economics than I do, why will you do this? The people are struggling, we need a voice to rally around, your voice has killed our spirit.

“We need a better voice to rally around, your voice has killed the soul of the country. You have done politics to save politicians, we need a man who will speak to save the nation. It is not too late, you are older than me, your seat is bigger than me (mine). It is not too late, you have the chance to reconsider your decision,” Taylor said in a post titled: “Do not pamper criminality.”

What Asantehene said about taxation

“Today, at least, the two main political parties have all been in government. If we are honest, we will agree that there is no perfect government and there will never be, as long as we have different points of view.

“And, if we are honest, we will also agree that there are no people in this world that love paying taxes, and yet there is no other way conceived by the human mind by which government can raise the resources to meet our needs other than by raising taxes.

“I do not know of any form of taxes that is less painful than others. So, alas, the government, by all means, would have to raise taxes to meet our needs and if we are good citizens, we will pay our taxes.”