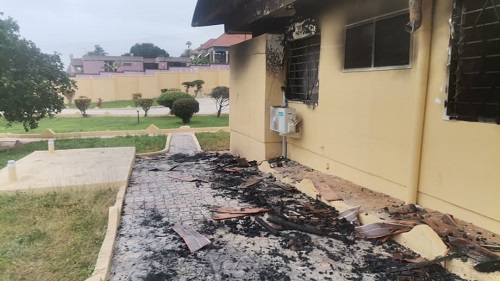 A/R: Five persons burnt to ashes in series of fire disasters in three years at Aburaso

Five persons have been burnt to ashes with seven houses destroyed in a series of fire disasters at Aburaso in the Kwadaso Municipality of the Ashanti in the last three years.

This was revealed by the Assembly member of the Aburaso Electoral area Hon Emmanuel Nyanteng.

The fire outbreaks in the area according to the assembly member have sparked fear among residents in the community.

Speaking to OTEC News Kwame Agyenim Boateng on Monday September 12, 2022, Hon Nyanteng called on security agencies in the region to conduct thorough investigations into these fire disasters and proffer pragmatic solutions to the problem.

The deceased identified as Mr Stephen Dapaa is said to be a Former Ashanti Regional Director of Audit Service Stephen Dapaah.

He was burnt to death after his 5-bedroom house was gutted by fire in the midnight of Saturday, September 10, 2022.

Five other people who were affected by the fire outbreak sustained serious injuries and were rushed to the Komfo Anokye Teaching Hospital.

The body of the deceased has also been deposited at the morgue in the same health facility.

Previous Nigerians hail Wendy Shay for rating their artistes above Ghanaians
Next Critical thinking, questionstorm and school system in Africa