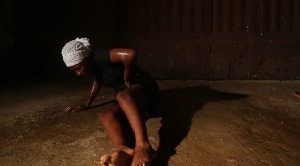 13-year-old Lapaylum’s parents had betrothed her to a 76-year-old man but she would not succumb to the whims and caprices of her parents although the man in question had paid her dowry two days after she was born. That was not the only gesture; he had been taking care of her right from that moment.

Due to Lapaylum’s wish to be an accomplished woman, she hurriedly ran away from the village to the city when she was informed that she was due for marriage. Although she was unsure where exactly she was headed, she knew she was escaping danger.

She became homeless, slept on the streets, and struggled for survival.

Her quest to avert trouble however landed her in another as she was “raped in the rain on an empty stomach” one night. She burst into tears!

The hospital became her ‘home’ as she received treatment.

15 years later, she had the opportunity to change the narrative for girls from her hometown.

“Child marriage is very common in some parts of Ghana. The short film seeks to draw the public’s attention to this social issue,” says Papa Kwame Aidoo, director and producer of the piece.

In Ghana, child marriage is prohibited. According to the 1992 Constitution, any person under the age of 18 is a child and can therefore not marry or be married off. This is highlighted in the 1998 Children’s Act.