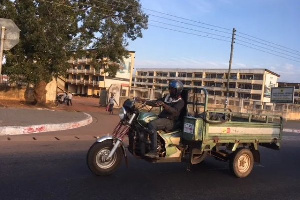 Mr Christian Sabunor, Tricycle or “Aboboyaa” operator in the Tema metropolis has called on the government to create tricycle routes and terminals to help them to convey waste materials from the source to the landfill site.

Speaking to the Ghana News Agency in Tema in an interview with regards to the restrictions of tricycles transporting waste materials on the N1 roads including; principal roads within the metropolis, Mr. Christian Sabunor said that, tricycles and motorbikes have the right to the usage of the N1 roads to transport their waste materials.

He said for instance someone living within the Ashaiman enclave needed to use the motorway to get to the Kpone dumping site, which was nearer than going all the way to Teshie to tip, and called on government to create more tricycle routes and terminals.

“It doesn’t make sense if you stay in Tema and you have to transport your refuse to Teshie while you can tip at Kpone dumping ground, which is the nearest,” he said, and stressed that there are infrastructure issues to deal with before considering restrictions.

He added that, most of the “aboboyaa” users rent the aboboyaa for GHC30.00 and above per day in that they operate in a similar way as “Trotro”, the operators would sometimes like to go and return early because they have to pay for the rentals.

He said after loading the waste into the tricycle for GHC50.00, they needed fuel of GHC20.00 and going for just one trip means they were running at a lost.

He advised that, government should create the tricycle routes and “if after which they faulter in any of the road traffic regulations that is when the government have the power to punish them because tricycle riders also have the right to the usage of the roads”.

Court issues bench warrant to arrest NAM 1 and 2 others