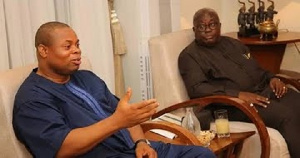 Founding President and Chief Executive Officer of IMANI Centre for Policy and Education, Franklin Cudjoe, has said current economic crisis should not form a basis for the government to review flagship programs.

In a series of tweets, Cudjoe decried the government’s failure to conduct value for money and cost-benefit analyses for its major programs and projects before rollout.

He also lamented the government’s inability to produce evaluation reports from the presidency and agencies commandeering the projects and programs.

The resultant effect Mr. Franklin Cudjoe said was the difficulty in understanding the proposed reviews and maintained that the absence of money should not drive the governments in haste to announce reviews.

He again cautioned against “sloganeering” with the word ‘review’ as if it was another manifesto promise.

“The Fiscal Council established by govt seemed not to have been engaged in conducting value for money or cost benefit analyses for all major flagship programs and projects when they were birthed. Not seen any evidence.

“Nor did we see evaluation reports from the presidency and agencies commandeering these huge projects and programs. Makes it difficult to understand the basis for the proposed “review”.

“It should never be the absence of money that calls for “reviews” which is what is driving the haste to announce the heavily publicised reviews. You should not be sloganeering with the word “review” as if it was another manifesto- promise,” Mr. Cudjoe tweeted.

The President, Nana Addo Dankwa Akufo-Addo, over the weekend held a quarterly cabinet retreat to decide on ways to mitigate the current economic challenges.

Meanwhile, Finance Minister, Ken Ofori-Atta is expected to brief the nation on Thursday March 24, 2022 on the outcome of the Peduase lodge retreat.