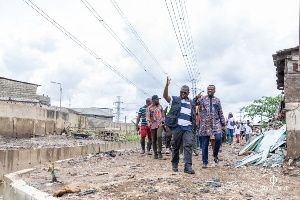 Accra floods: Buildings on waterways to be demolished – Works and Housing Minister

Works and Housing Minister, Francis Asenso-Boakye says government will soon embark on a mass demolishing of buildings mounted on major waterways in the city of Accra to curb the yearly flooding.

He told NEAT FM’s morning show, Ghana Montie, in an interview that, the city authorities will be given the ‘red light’ soon for the demolishing exercise.

“No building will be spared if it’s on a waterway,” he noted.

Mr Asenso also said dredging has been going on at the two major drains in Accra, as part of measures to free all choked drains in the city to improve the flow of rainwater and prevent flooding.

He urges residents in Accra to be responsible to end perennial flooding while dredging the capital continuous.

“We must all help so this flooding can stop,” he said.