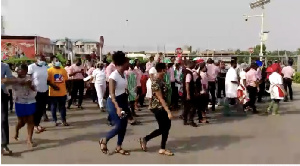 Starr News sources say shoppers and revelers panicked as a result of the exercise which was to test the readiness of emergency responders.

An earlier version of this report had claimed there was a fire outbreak at the mall. Further checks confirmed it was planned exercise.

Both staff and shoppers were evacuated from the facility for the exercise.

Where to invest your money in 2022

Year in Review: Business personalities that died in 2021