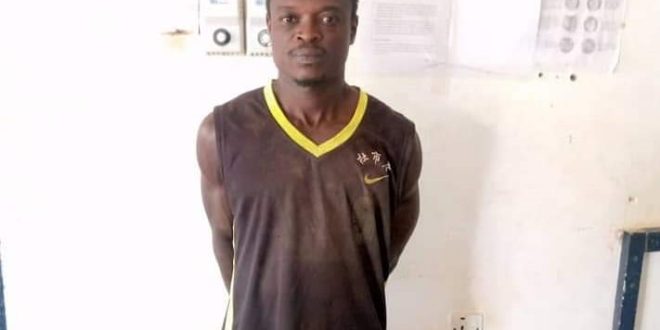 Police in Ejura have arrested a suspect who shot and killed a 45-year-old man at Hiawoanwu in Ejura/Sekyedumase Municipality of the Ashanti region, after 2 Fulani herdsmen were lynched over the murder, MyNewsGh.com has confirmed.

The suspect, Mahamuru Ghana, attacked the victim at his farm last week and shot him in the stomach and head, killing him instantly before fleeing into the bush

The victim was with his 9-year-old son when the attacker ambushed them on their way from the farm but he however did not harm the little boy after killing his father.

The killing of the victim had triggered a reprisal attack on Fulani herdsmen in the area who it was earlier wrongly announced were responsible for the killing.

The angry villagers invaded the Fulani camps and killed at least two Fulanis and destroyed their properties before the news followed later that the Fulanis were innocent and had no hand in the incident.

According to the little boy, the suspect emerged from the bush and shot his father after a short exchange.

“He shot him and asked me if I knew him”, according to the boy. “But I told him I don’t know. He told me to run and said if I got home I should say my father was killed by one Burger (from Yeji)”. The little boy is reported to have said

He was brought back to Ejura and currently in custody in the police station. According to the police who confirmed his arrest to MyNewsGh.com, he has confessed to the crime and would be arraigned before court.

Previous VIDEO: I love Patapaa’s D**k And How He Respects Me – Wife of Patapaa Say As They kiss On Neat FM
Next Over 100 shops demolished in Kumasi