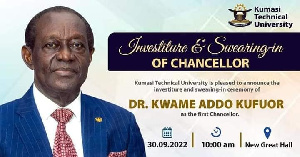 Former Minister for Defence, Dr Kwame Addo-Kufuor, has been appointed as Chancellor of the Kumasi Technical University.

Dr. Addo-Kufuor will become the first chancellor of the university, which was formally Kumasi Polytechnic.

Kwame Addo-Kufuor is a Ghanaian politician and physician. He was a Member of Parliament for Manhyia.

He holds a Bachelor of Medicine from the University of Cambridge. He also studied at the Middlesex Medical School Hospital and Jesus College.

Kwame Addo-Kufuor won against Yaw Addai Boadu, an NDC member, in the December 1996 general elections for the Manhyia Constituency in the Ashanti Region of Ghana.

He was re-elected against Samuel B. Donkoh, an NDC member, Salifu Mumuni and PNC member, and Nana O. Boateng.

He was elected over Salifu Mumuni of the People’s National Convention, Kwame Boateng of the National Democratic Congress, E. A. Ohene Darko of the Convention People’s Party, and Kofi Pervical Akpaloo, an independent candidate.