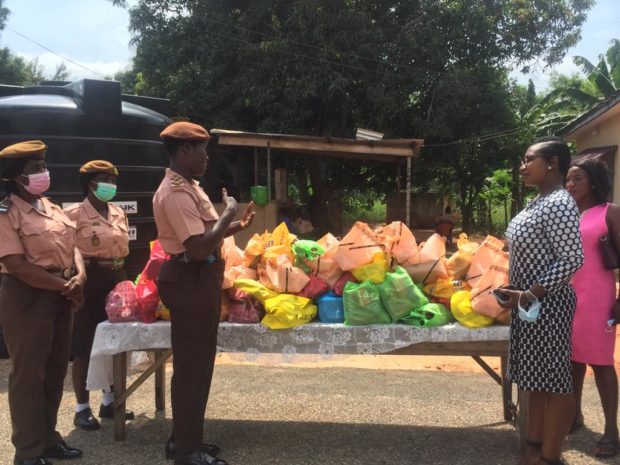 “I was in detention for three months but after four weeks, they took me to prison because I was like, I can’t,” Miss Hegglin said.

A Ghanaian Swiss citizen has shared how her experience in a Switzerland cell made her develop special affection for inmates.

Cynthia Hegglin, a mother of three and leader of ‘Three Sisters’ Foundation’ says she was arrested about a decade ago when a friend in possession of drugs visited her from Ghana.

For unknowingly admitting a criminal in her custody, Mrs. Hegglin says she spent three months in prison before the truth was revealed.

The experience she had whilst prison is what she told Ghanasonline.com developed her love for prisoners, thereby celebrating each birthday of hers henceforth with an act of benevolence to them.

She made the revelations after celebrating her birthdate with inmates at the Nsawam Medium Security Prisons in the Eastern Region.

A package of about 200 pieces of food comprising jollof rice and chicken, a bottled water, a drink and biscuit were distributed to both the male and female prisons on Miss Hegglin’s 48th birthday anniversary.

She believes her conviction was to give her experience of other part of society to better understand the plight of prisoners, considering the “hell” she went through at the Swiss penitentiary.

“Quite 10 years ago I was locked up for 3 months and since I came out, I’m always donating not only in Ghana but anytime I have a birthday, we go to the prisons to donate.”

“A friend came from Ghana to visit me not knowing the person was carrying drugs. And I had a big shop in Switzerland those days so I was surprised that police popped into my shop as a hairdresser and searched there”

“They couldn’t find anything and then they told me someone visited you, where is the person and I said the person is in the house and they searched where she was in the room and they found that [the drugs]. And before I could say something, I was locked”

“So they made their investigations and realised I was innocent and released me after three months and they said sorry to me. And what I went through in there was like a hell,” she narrated to Ghanasonline.com on Wednesday, October 27, 2021 at the Nsawam Prisons.

She furthered her experience at the remand centre was horrible, making her opt for the prison premises where things were a bit normalised.

The officer on duty of the female section on the day, ASP Ayishatu Sulemana Hamidu expressed gratitude for the gesture, calling on others to emulate the philanthropy.

“I thank her on behalf of the leader of the Nsawam Female Prisons because we weren’t expecting something like that. So we ask for God blessings and ask that Ghanaians mimic what she has done.”