Home / ENTERTAINMENT / ‘After this case, we will be friends’ – Jesus Ahuofe reveals brief chat with Shatta Wale 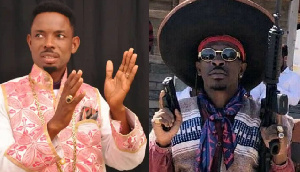 ‘After this case, we will be friends’ – Jesus Ahuofe reveals brief chat with Shatta Wale

He disclosed in a radio interview that he has been “hot” as in busy, since his release from prison custody by a court last Tuesday.

In an interaction with Akwesi Aboagye on Peace FM’s Entertainment Review programme, he revealed his only interaction with Shatta Walewho he met for the first time at the premises of the court.

He said even though he knew the musician, Shatta Wale did not know him at a time they were both picked in a common van for their appearance before the court for a bail hearing.

“I have never spoken to Shatta Wale ever before, I don’t even have his number. The day I was arrested and was being sent to court, I was picked up first from the cells. I was standing by the police van and after a while, he was also picked into the same van.

“When we reached the court, I was called and my water given to me and that was when he noticed me so he said ‘ei pastor, so you are the one? Oh, don’t worry, after this case, we will be friends.’ That is all he said,” he recounted.

Shatta Wale and three other aides were picked up over a social media post that alleged he had been shot and wounded, claims that turned out to be false. The musician is facing charges relating to causing fear and panic, while his aides are charged with aiding and abetting crime.

Jesus Ahuofe’s arrest was premised on the fact that it was his prophecy that a popular musician, by the name Charles, will be shot on October 18 that triggered the ‘prank shooting’ incident Shatta Wale and his team orchestrated. He was also granted bail by a court on the same day.