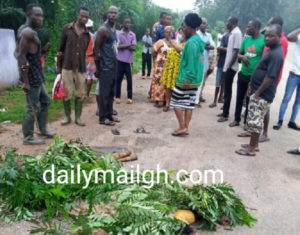 A man was run over and crushed to death while he was sleeping under the very same truck, the police have confirmed.

The incident occurred on Monday morning when he and his driver had made a stop on the Tanoso road in the Ahafo Region, witnesses told dailymailgh.com.

The suspect driver, who is yet to be identified, started moving the truck and run over the sleeping colleague, critically injuring him in the process.

The victim was later declared dead at the scene. His body has since been deposited at the Sunyani Municipal Hospital morgue for identification and autopsy.

Police say it is searching for the suspect driver who fled the scene after committing the act.

Hundreds are killed in road crashes in Ghana every year. The accidents are mostly blamed on poorly maintained roads and vehicles or negligent driving.

The National Road Safety Authority (NRSA) has begun partnering the media and other stakeholders aimed to reduce the numbers of road accidents and resulting deaths.