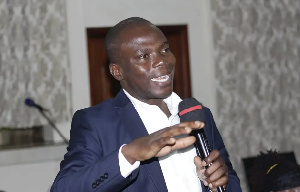 The Executive Director of the Media Foundation for West Africa (MFWA), Sulemana Braimah, appears to be trolling President Akufo-Addo for his government’s insistence to go on with the National Cathedral project, despite the opposition by Ghanaians.

In a tweet shared on June 9, Sulemana Braimah, said that the stone imported by the government for the construction of the project is one of Nana Addo Dankwa Akufo-Addo’s unprecedented achievements as President of Ghana.

He added that Akufo-Addo borrowing more than all other governments Ghana has had is another unmatched achievement he has chalked.

Meanwhile, President Nana Addo Dankwa Akufo-Addo has said that the National Cathedral is the missing link in Ghana’s development. According to him, the project is equally important as any development project in the country.