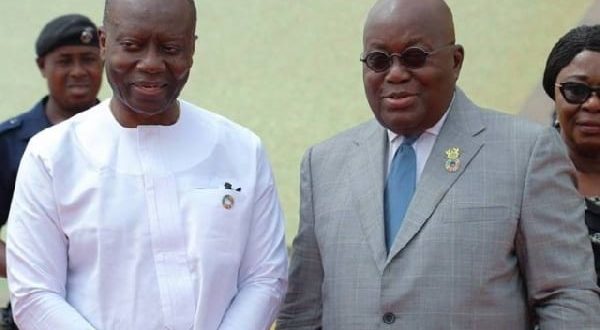 Prof Baffuor Agyemang-Duah, a governance expert and Chief Executive of the Kufuor Foundation, has listed three ministers that President Nana Addo Dankwa Akufo-Addo must relieve of their positions.

He cited growing public sentiment for his call for the trio to be fired amid calls for the President to conduct a reshuffle, which he has ruled out.

Speaking on Joy News on Sunday, August 14, 2022, Prof Agyemang-Duah said the president needed to conduct a ministerial reshuffle to pump some energy into his team.

He was of the view that the listed MPs have been underperforming over the last six years.

“If you put your ears to the ground what we hear popularly is the health sector implying the Minister of Health as well as the Minister of Agric, these two including the Finance are the prominent ones.

“So all these could be factors that I think if the President wants to make a move he can take an account of to inform his decision,” he explained.

Ofori-Atta has been a major fixture in calls for dismissal because of the economy. He has expressly stated that he will not resign because it will be akin to a father abandoning his children.

Calls for a ministerial reshuffle have heightened in recent weeks on the back of an economic downturn that has forced the government to seek an economic rescue programme from the International Monetary Fund, IMF.

The President, on August 8, while speaking in an exclusive interview on Tamale-based North Star radio, during an official tour of the region; defended the output his ministers have put in so far, stating: “many of them for me have done outstanding work. Their output has been considerable, and that is what I look at.

“If the output measures expectations, then I don’t have any strong reasons to heed the call,” President Akufo-Addo added.

Even though the calls have come from the opposition, there have been rising calls from within calling for a reshuffle. The President’s only reshuffle since coming into office in 2017 was in August 2018.