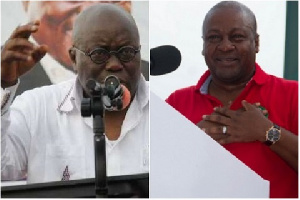 Former President John Dramani Mahama believes the Akufo-Addo-led administration put their personal political gains ahead of the wellbeing of the ordinary Ghanaian prior to the outbreak of the Novel Coronavirus.

The former president explains it is the best description that suits the ruling government’s decision to abandon some health projects he began while serving his term as president.

“…There were a number of these health facilities which were not completed at the time we left office and only required a little more effort to complete. The natural expectation, therefore, was that the succeeding government would swing into action and have them completed and press on to make further investments, government citing very strange reasons dithered in the operationalization of even those hospitals that were completed…a clear case of putting politics before the people…”

According to him, President Nana Addo Dankwa Akufo-Addo together with his administration were consumed with finding faults with projects that had already begun under his administration thus causing them to lose sight of the important issues.

The former president makes a case that delays in completing and operationalizing health facilities like the University of Ghana Medical Centre, the Municipal hospital at Ofankor and the Kasoa Polyclinic has had a damning effect on Ghana’s fight against the coronavirus.

“What has been the cause of the abandonment and stoppage of work despite the availability of funds?… Fruitless and malice driven value for money audits that yielded virtually nothing…But for the inexplicable failure to continue these projects we would have been in a better position to tackle this COVID-19 pandemic with a more robust health system,” John Mahama lamented.

He said had it not been the overwhelming pressure from the media and a section of the Ghanaian populace, such project would have been left to rot.

However, the former president still believes that the delay in continuing such projects in question was a deliberate political acts of his successor.

“…But for the deliberate slowdown of operationalization of the University of Ghana Medical Centre and the Bank hospital, the unacceptable ‘No-bed Syndrome’ would not have claimed precious lives…whatever the challenges with these projects, they should not have been left abandoned and at the mercy of invading weeds and reptiles and in some cases affected by bushfires…”

Meanwhile, the Akufo-Addo government has vehemently rejected such accusations of abandonment.

They claim they have in their power done due justice to such projects under scrutiny in accordance with the provisions of the constitution of the republic.

Previous Chorkor Bridge: God have mercy on you – Ursula Owusu to critics
Next May Day: Bawumia outlines 37 reasons to celebrate Ghana’s ‘number one worker’ Prez Akufo-Addo